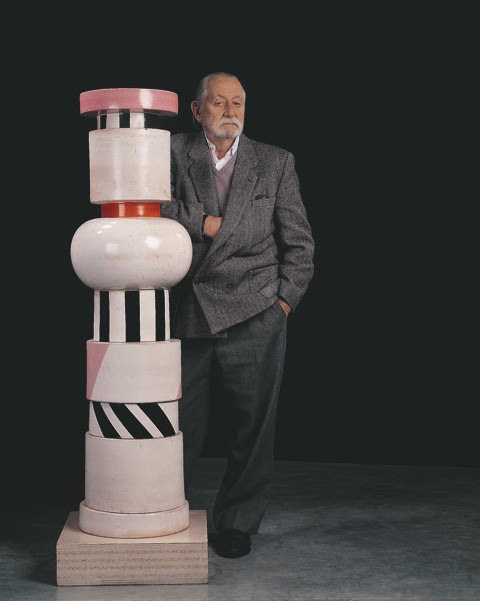 AMSTERDAM – The Stedelijk Museum Amsterdam has acquired an important item by Italian designer Ettore Sottsass (1917-2007), one of the most influential designers of the second half of the 20th century. The work is Cabinet no. 70 (2006), a monumental piece of furniture that is a combined cabinet, table and dresser.

Famous for his Postmodern Memphis furniture of the 1980s, Sottsass continued to raise eyebrows with his innovative concepts and unexpected combinations of materials right into old age. This cupboard (below), combining wood with acrylate, is a strong visual statement and a daring autonomous object that, as always with Sottsass, is also functional. The acquisition is a welcome addition to overall national holdings, since no other public collection in the Netherlands includes any example of furniture from Sottsass’ later years. 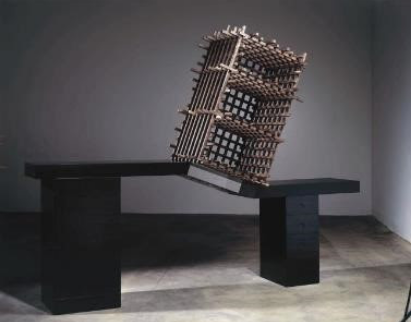 The work produced by the Italian maestro in the course of his extraordinary 70-year-long career is the focus of renewed interest among young designers, partly because of a resurgence of interest in the 1980s, Postmodernism, and therefore a major part of Sottsass’s oeuvre. From April to the end of August 2018, the Stedelijk will present the first ever Sottsass retrospective in the Netherlands, covering the entire range of his oeuvre. Although his importance is recognized in this country as elsewhere, Dutch interest has previously tended to focus mainly on his Postmodern period of the 1970s and ’80s (including Memphis).

Among the topics addressed in the forthcoming retrospective will be Sottsass’ relationship with Modernism and Functionalism (which he initially embraced, later criticized and perhaps even parodied, but never completely rejected), the influence of other cultures, his experiments with materials and form, the humanism and playfulness inherent in his work, and Sottsass as an inspirational figure for a younger generation.

The retrospective at the Stedelijk will reveal Sottsass’ versatility: he was active in a host of fields, including painting, architecture, photography, writing and a very broad area of design – from jewelry, lighting and furniture right through to the mainframe computer he designed for Olivetti in 1959. In view of the vast range of his oeuvre, his work can be used to illustrate and explain a variety of trends in the design history of the latter half of the 20th century.

With over 80 works, the Stedelijk has one of the largest Sottsass collections in the Netherlands. It includes the well-known Alessi table accessories, his famous Olivetti Valentine typewriter, furniture, lamps, the Memphis textiles and glass of the 1980s, and designs dating from both earlier and later periods in his career. The relationship between the Stedelijk Museum Amsterdam and the designer took off in 1968, when his work was included in the museum’s Vormgevers (“Designers”) exhibition. After that, Sottsass quickly became one of the key figures in the design collection and his work was frequently featured in group exhibitions, like Energieën (“Energies”) in 1990. The Stedelijk has continued to follow Sottsass’ development with interest.

Recent acquisitions include the 10 early ceramics purchased in 2010, and the monumental Superbox cabinet of 1966.