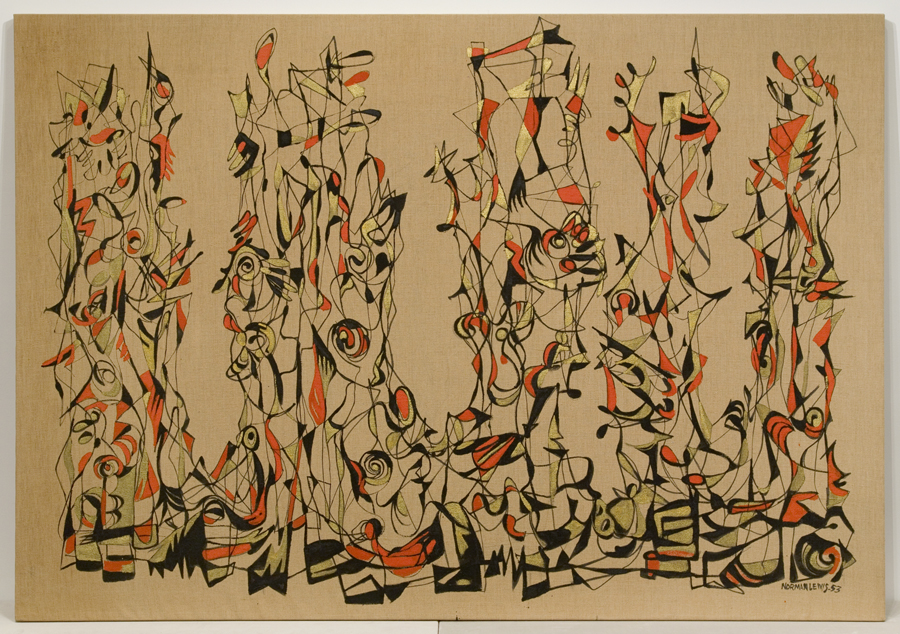 NEWARK – On Nov. 5, the Newark Museum Board of Trustees approved the acquisition of a major work by the Abstract Expressionist painter Norman Lewis (1909-79). Untitled, 1953 was acquired from Michael Rosenfeld Gallery in New York.

“This rare painting, previously in the collection of the artist’s estate, features Lewis’s calligraphic brushwork in a series of sweeping vertical forms. It’s remarkable both for its scale and for its bold abstract composition. Untitled, 1953 reflects the confidence and virtuoso painting of an important figure in the New York School at the height of his career,” said Tricia Laughlin Bloom, the Newark Museum’s curator of American art.

Untitled, 1953 measures approximately 4 by 7 feet; the medium is oil and gold metallic paint on linen.

Born and raised in Harlem, Lewis is central to both the development of American abstract art and to African-American art. Lewis’s life and work form a bridge between the art of the Harlem Renaissance, Abstract Expressionism, and activist art of the 1960s. A first-generation Abstract Expressionist, Lewis moved from a documentary, social realist style in the 1930s toward an increasingly abstract style in the 1940s and ’50s. Continuing in a largely abstract style, in the 1960s Lewis painted a number of works dealing explicitly with issues of race and civil rights.

“Lewis has a rich history of being shown at the Newark Museum, and his body of work and subject matter are relevant to the museum’s audiences and our ongoing commitment to collecting and exhibiting African-American art,” said CEO and Director Steven Kern. Works by Lewis were included in the Newark Museum’s early exhibition “American Negro Art” (1944) as well as “Black Artists: Two Generations” (1971), all works lent by the artist. In 2004 the museum acquired multiple works by Lewis as part of the Bequest of Irene Wheeler.

Untitled, 1953 is currently on view in the exhibition “Processional: The Art of Norman Lewis,” a major retrospective that opened Nov. 13 at the Pennsylvania Academy of Fine Arts and will continue on a national tour. When Untitled, 1953 returns in 2017, it will be installed in the Museum’s American Art gallery.

Lewis’ paintings are held in the permanent collections of many institutions, including the Museum of Modern Art, Whitney Museum of American Art, the Art Institute of Chicago, and the Smithsonian American Art Museum.

For further information about the Newark Museum, visit www.newarkmuseum.org.

Gigantic Jamali painting to be featured at Associate Auctions Nov. 20
Scroll to top