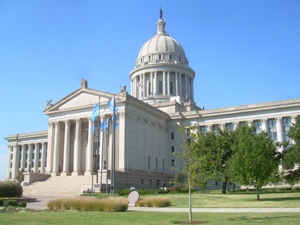 The Oklahoma state Capitol in Oklahoma City opened in 1917. Image by Caleb Long. This file is licensed under the Creative Commons Attribution-Share Alike 2.5 Generic, 2.0 Generic and 1.0 Generic license.

OKLAHOMA CITY (AP) – The state Capitol has been a symbol of Oklahoma’s history and aspirations since it opened in 1917. The halls of the limestone and granite edifice were lined with the portraits of famous residents, including humorist Will Rogers, Olympic champion Jim Thorpe and Soquoyah, creator of the Cherokee syllabary. The building sat on an oilfield with dozens of working rigs that represented the state’s hopes for prosperity.

But 94 years later, the building reflects Oklahoma’s problems, especially its fiscal hardship. The stately structure is beginning to crumble. Yellow barriers have been erected to prevent visitors from climbing the steps of the Capitol’s south portico because mortar and pieces of limestone are falling from slabs overhead.

An engineering analysis found mortar between the massive limestone panels was disintegrating, and the metal clips holding the panels have apparently corroded. Repairs, along with revamping the outmoded electrical, plumbing and other systems, could cost as much as $130 million.

“We’re still attempting to cover the scope of the problem,” said Mike Enneking, director of facilities management for the state. “We haven’t really decided what we’re going to do yet.”

The problem comes at the worst possible time, as the state works to recover from a $500 million budget deficit from last fiscal year. The Legislature made significant budget reductions during the last session in funding for schools, mental health and public safety. State officials must now weigh the costs of restoring the state’s iconic monument against the needs of programs with human impact.

“We’re at a point now, both for preservation of the building and for public safety, that the Legislature is going to have to be addressing this,” said Richard Ellwanger, chairman of the State Capitol Preservation Commission.

Visitors seem to be reaching the same conclusion.

“I noticed the caulking is cracked,” said Robert Channer of Lapeer, Mich., who toured the building Friday. “It doesn’t look like they have an exterior maintenance program. It’s a shame because it’s a beautiful place.”

State officials have been aware of the growing problems but unable to address them.

Legislation was filed in 2009 to form a public-private partnership to raise money for renovations, but it didn’t pass. In bad economic times, deferring costs has become commonplace.

“We haven’t done much to fix anything,” said Rep. Guy Liebmann, R-Oklahoma City, the measure’s author. “It’s not a Republican House. It’s not a Democratic House. It belongs to everybody. And they need to take care of it.”

Alex Weintz, spokesman for Republican Gov. Mary Fallin, said the governor has no specific proposal to address the Capitol’s deterioration. Ellwanger said he believes the state will have to ask private donors to help pay for the work. A call for public donations raised $21 million to put a dome on the neoclassical structure for the state’s gala centennial celebration in 2007. The dome completed the original architect’s design after work was cut short by the onset of World War I.

While state officials have been emphasizing austerity this year, the deterioration has become impossible to ignore. Concern about falling debris prompted state crews to erect covered scaffolding above a walkway at the Capitol’s southeast corner.

“We don’t want anybody to get injured,” Enneking said.

A detailed examination found a concrete beam above the south portico that is crushing the brick that supports it, antiquated piping and electrical wiring that are original to the building. There’s extensive cracking of the terrazzo floor in the building’s lower level. Some officials estimate a thorough rehabilitation project could take 10 years.

The work of architect Solomon Layton, who designed more than 100 public buildings in Oklahoma, the Capitol was constructed of reinforced concrete between 1914 and 1917 for just $1.5 million. Its exterior is composed mainly of white limestone with a base of Oklahoma pink granite.

The building is one of the most popular tourist destinations in the state, drawing more than 15,000 visitors a year, according to the Department of Tourism.

“State capitols in every state are the people’s house,” said Barbara Pahl, vice president for western field services for the National Trust for Historic Preservation. “People need to have things they feel good about. The capitol represents all of that.”