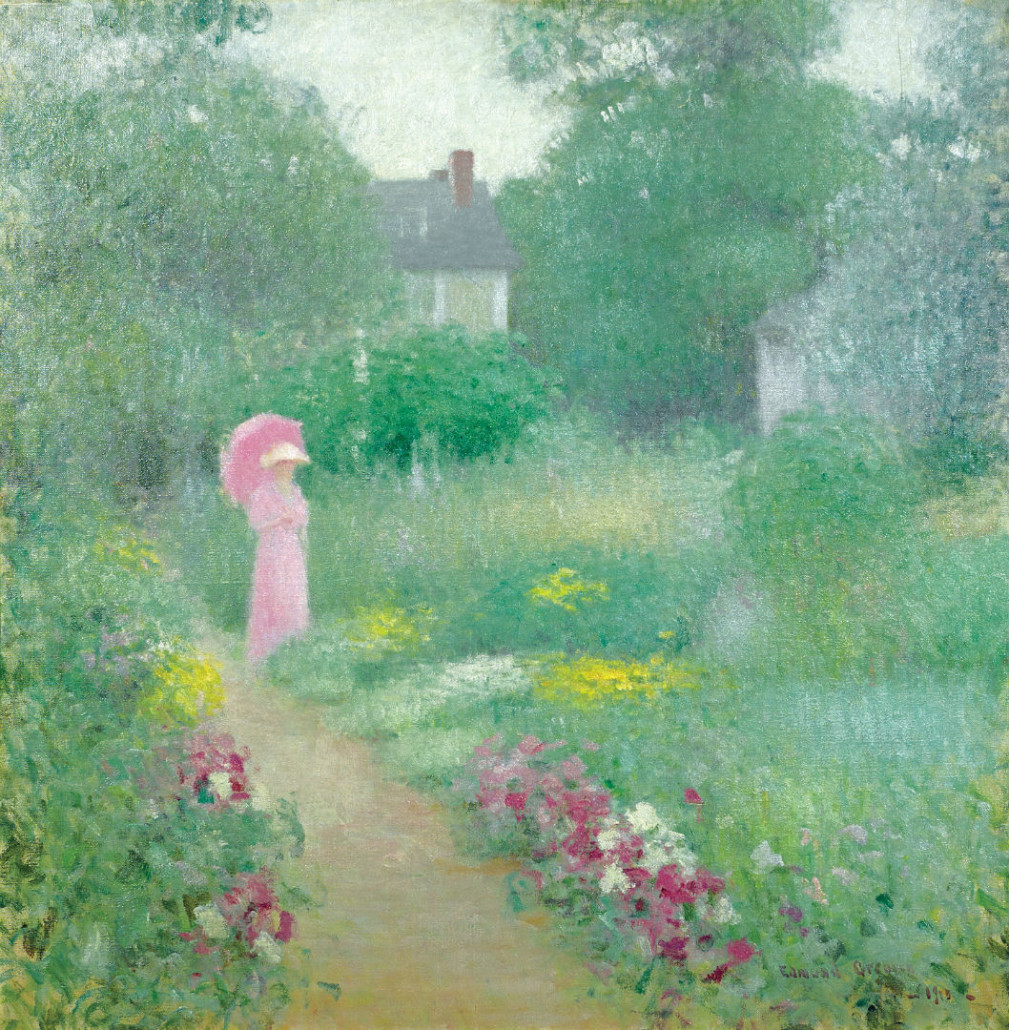 The gardens they sought, known as “grandmother’s gardens,” were utterly unlike the formal Victorian gardens of the time. These were homey, Colonial-era flower gardens, densely packed with bright and abundant blooms – red and orange poppies and enormous peonies in pastel pinks and purples set against backdrops of towering blue delphinium, digitalis with their tiny bell-shaped white and purple blooms, and yellow sunflowers.
The delicate foreground might include violas, calendulas and violet sage.

Grandmother’s gardens were designed so that no matter what season, something was always blossoming and bright, with blooms planted close to houses and porches to encourage lingering, touching, tinkering and inhaling.

“Impressionism: American Gardens on Canvas” is a multi-disciplinary show at the New York Botanical Garden, in the Bronx, through Sept. 11. Along with flowers, it includes paintings – 20 Impressionist paintings inspired by such gardens. Most of the artworks will travel next to the Taubman Museum of Art in Roanoke, Virginia, where they will be on view from Feb. 17 to May 14, 2017.

Artists featured in the New York Botanical Garden’s Rotunda gallery include William Merritt Chase, Childe Hassam and John Singer Sargent among others. Some of them gardened, and all were known for their skill at painting outdoors and for bold, painterly brush strokes.

“The positive reception of Impressionism in the United States coincided with a burgeoning garden culture, and these interpretations of well-tended residential gardens resonated with American ideas of the good life,” said guest curator Linda S. Ferber, a senior art historian at the New-York Historical Society.

The paintings are easy on the eyes, she said: “Americans have always had a sweet spot for landscape, which carries many messages about national and cultural identity. Here, we can see how deeply enmeshed in the American psyche gardening was.”

Impressionism was considered edgy in its day, which was the same era when the New York Botanical Garden, now celebrating its 125th anniversary, was founded, along with some of the East Coast’s most famous parks, museums and gardens.

Preparing for the show involved training a dizzying array of flowers to bloom all at once for maximum impact. That took much of the past three years, numerous greenhouses and the garden’s enormous team of experts, who grew and trained around 50,000 plants for the exhibit.

“In real life, you would never see all these flowers blooming at the same time. It’s a living work of art, an ideal garden in perpetuity. So don’t try this at home,” said Todd A. Forrest, the garden’s vice president for horticulture and living collections. “And many are flowering off-season, so don’t expect to see them in the shop.”

Once a week, whole sections of the garden are replaced, if needed, so the display continues to looks perfect.

“The result is that if you squint, you should be able to see a living Impressionist garden,” Forrest said.

To put the grandmother’s garden in context, much of the exhibit is nestled around a model porch, the type of architecture often included in the backdrop of American Impressionist paintings.

The exhibit is accompanied by a program of poetry, lectures, tours, music, dance and even an “1891 Ale House,” offering snacks and drinks in keeping with the era.
___

Reading the Streets: The Bright Blue Beacon of SoHo