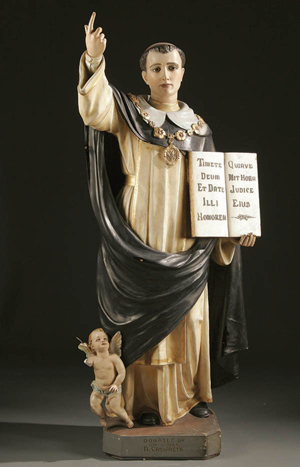 LAKEWOOD, Ohio (AP) – Lou McClung’s past life as a handyman, and his present career as a photographer, makeup artist and manufacturer, were perfect preparation for his future as a curator of an unusual museum.

The owner of Lusso Studio and Lusso Statuary recently purchased a decommissioned church, 104-year-old St. Hedwig, which will serve as the Museum of Divine Statues.

McClung said his mission to rescue religious statues, many of which come from parishes closed recently by the Cleveland Catholic Diocese, will help ensure the history of those churches.

Several statues many more than a century old were in great need of cleaning and repair. Stuffed in closets, storage rooms and choir lofts, some pieces fell victim to a push for modernism in the 1960s and 1970s.

“It’s interesting how all the little things you learn to do can contribute,” he said. “You wonder why you’re doing things, then it comes in handy for something like this.”

McClung, who has been footing the restoration costs out of his own pocket, taught himself how to clean and repaint the pieces, as well as craft missing fingers and arms.

“My goal as an artist is to make the statues as realistic as possible,” he said.

In graceful repose, numerous images of Jesus, Mary, angels and martyred saints crowd McClung’s makeup studio. People from across the country have found their way to Lusso Studio, which is housed in a century-old greenhouse.

St. Thomas Aquinas is depicted in a circa 1920 polychrome plaster statue, which has glass eyes. The three-quarter life-size figure sold for $500 at an auction in 2007. Image courtesy of Jackson’s International Auctioneers & Appraisers and LiveAuctioneers archive.

McClung said people marvel at being able to get a close-up look at statues they had seen all their lives from afar. The collection also includes a 13-foot crucifix, beneath which his parents were married.

McClung said the nonprofit museum is a natural outgrowth of his hobby and business as an art collector.

“I bought my first statue at an antiques store,” he said. “I thought it was a great type of art to save and to rescue.”

When churches began to close, friends, acquaintances and even clergy started bringing statues to McClung’s attention. Some parishioners from defunct churches bought and donated statues in memory of their families.

“The statues have become familiar faces in their churches,” he said. “If I can pull this off, it’ll give every (closed) church some recognition.”

The closing in 2009 of 50 parishes in the eight counties that make up the Cleveland Diocese triggered a wave of grief and anger among parishioners.

Longtime symbols of a city’s ethnic diversity, several historic parishes in Cleveland fell victim to a perfect storm of dwindling attendance, a shortage of priests, a population shift to the suburbs and high energy costs.

The trend of reconfiguring Catholic parishes is national. Earlier this year, the Catholic Diocese of Youngstown, which includes Stark County, announced plans to reduce the number of its parishes.

However, 14 Cleveland parishes that were ordered closed have appealed to the Vatican. A decision is pending. In defiance of their closing, parishioners from the former St. Peter’s parish started an independent church that celebrates Mass in a warehouse.

“If people don’t get their churches back, we’ll rescue their statues,” McClung said.

“Religious art has been at the core of our history, long since the early Christian days,” said M.J. Albacete, executive director of the Canton Museum of Art and a recognized expert on religious art.

Albacete said the tradition of church sculptures originates with Greek and Roman art.

“When Christianity came in, they were quick to adopt the idea of sculpting religious figures, at first representations of Jesus,” he said.

Albacete said churches regarded paintings, stained glass and sculpture as a means to raise Christianity’s profile as the faith spread around the world.

“Any kind of art in those days was seen as an ability to spread the Gospel and Bible stories,” he said.

Albacete said the high point of church art occurred during the Renaissance, and that many of history’s greatest works of art, such as Michaelangelo’s Pieta, are religious in nature.

“The time and labor he spent working on that, it’s a wonderful devotional piece,” Albacete said. “I’ve seen it a number of times. It’s a great masterpiece.”

Planned renovations at St. Hedwig’s include replacing its contemporary sanctuary windows with antique stained-glass panels, removing two ceiling murals, restoring its original hardwood floor, reinstalling St. Hedwig’s statue on the front of the building, and moving a 10-foot tile mural of the patron saint to the front entrance.

“There’s no greater use for a decommissioned church than a Catholic museum,” McClung said.

McClung also plans to move his makeup business into the old St. Hedwig’s School, which is adjacent to the church. The 6,000-square-foot museum will feature a coffee shop, gift store and a “memory kiosk” featuring photos and recorded recollections by parishioners in the diocese.

There will be a nominal admission fee to cover the cost of operation.

“As far as the diocese is concerned, we have been supportive and have been working with (McClung) in his efforts; we know he does have some fund-raising challenges,” diocese spokesman Robert Tayek said.

“We don’t readily sell or offer the type of statues outside the church realm, if you will,” he said. “In his case, there has been an exception made because we know what he’s doing with it.”

Made out of plaster, horse hair, linden wood and marble, religious statues often are reflective of the many ethnic parishes and monasteries they once adorned. McClung said he researched the statues’ origins and learned, for example, that statues made in Spain always have brown eyes, dark hair and olive skin. Statues made in Germany, Poland and Slavic countries tend to be fair-haired, blue-eyed and fair-skinned.

Statues made in the 1920s feature realistic-looking eyes made of glass, including ocular veins made of red-silk thread.

“It’s an amazing process,” he said.

The collection’s oldest piece is that of St. Elizabeth of Hungary (1855), acquired from the former St. Ladislaus parish.

McClung, who grew up in the east Cleveland suburb of Willowick, views the nonprofit museum as a way of repaying the kindness he received as a Catholic child.

“Our parish was very good to our family,” he recalled. “We weren’t able to afford tuition for school, but they made it possible. My experiences with Catholic education was amazing.”

He points out that objects such as stained glass, statues and stations of the cross were used by the early church to teach the mostly uneducated laity about their faith.

“My goal for this (museum) is so people, including non-Catholics, can understand the different parts of Catholic education,” he said. “It’s artwork that’s meant to inspire.”

“We’re praying and wishing him all the best, and we’re hoping it will be a successful venture,” Tayek said. “We’ve never seen anything quite like this.”

“Today, we don’t use statutes as much, but we have a long history of (religious) sculptures,” Albacete said. “They really do deserve to be preserved.”

McClung is ambitiously aiming for a December opening.

“This is definitely a calling,” he said. “I’ve been called crazy by a lot of priests; they said I was crazy to undertake it, but they meant it as a compliment.”

Information from: The Repository, http://www.cantonrep.com

Early machines eased the drudgery of washday
Scroll to top