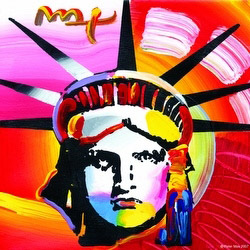 LITTLE ROCK, Ark. (AP) – Peter Max figures he and Bill Clinton go pretty well together, so he said it came naturally to pick a selection of his work for an exhibition at the Clinton Presidential Center.

The pop artist known for his colorful canvases and psychedelic portrayal of cultural icons, became friends with Bill and Hillary Clinton after the 1993 inauguration, and said they told him they had posters of his on their dorm room walls when in college.

“I was beyond belief thrilled,” Max said.

Now, Max’s work hangs through three floors of the museum at Clinton’s presidential library for a show that begins Monday, Presidents Day, and runs through May 25.

The exhibition includes Max’s depiction of presidents; American symbols, such as the White House and the Statue of Liberty; and other images of his adopted country and beyond. Portraits range from side-by-side interpretations of DaVinci’s Mona Lisa – one so dark she almost disappears, the other a rack of nine squares of her face, splashed with bright colors.

Max recalled attending Clinton’s first inauguration, with a prime seat just a few feet from where Clinton took the oath of office. Beforehand, Max had painted 100 portraits of Clinton, an assemblage that Clinton saw on his way out of the Capitol for his first trip to the White House.

Max said Betty Currie, Clinton’s secretary, later told him that the president said, “If I hadn’t just been sworn in, this (seeing his portraits by Max) would have been one of the highlights of my life.”

“For years and years,” Max continued in a telephone interview, “I remembered this story. I didn’t dare tell anybody – it would sound like I’m exaggerating.”

Three panels featuring 64 of the portraits are hanging on the library’s second floor.

“Bill Clinton is the one that is the centerpiece of all the amazing people I’ve painted,” Max said in his quick, breathless and still slightly accented speech.

The exhibition, titled Peter Max Paints America, works as a retrospective. It includes a painting in realist style from 1964, but also ink blots from the same year, one in a starburst of color that looks like a tie-dye pattern. There are plenty of presidents and celebrities. Jimmy Carter in a hardhat and Bob Dylan, with bushy hair and wearing sunglasses, bordered in pink and white and yellow designs of flowers and ovals.

Portraits of Bill and Hillary greet patrons as they walk in the first-floor gallery. Folks will have to walk behind a partition to reach a painting of George W. Bush. The informal look portrait of Carter is on a panel beside a series of images – wildly colored but with grave expressions – of Dwight Eisenhower, William Howard Taft and Franklin Roosevelt.
Abraham Lincoln, with red bow tie, is nearby, as is a wispy, long-necked take on Thomas Jefferson. A Barack Obama portrait is in the mix. The works were still being hung on Thursday, with gloved workers referring to charts prepared by Max’s studio in New York, which worked with models of the exhibition spaces to decide where the 200-plus pieces would best fit.

On the second floor are several sculptures – an 8-foot Coca-Cola bottle and a guitar that’s almost as big. Much smaller is a bronze Statue of Liberty, painted blue with splashes of gold, red and yellow. Downstairs is a painted saxophone.

Talking with Max, it is evident that he is the opposite of a tortured artist. He speaks fast, as though he wants to fill each minute with as many stories as possible. At a show at the Hermitage museum in St. Petersburg, Russia, Max said he was enthralled by the young people who turned out. “They all kept saying two words, ‘Peace. Beatles,'” Max said, laughing. A moment later, a tale of buying out the stock at an antique store on Royal Street in the French Quarter in New Orleans.

The painting of George W. Bush came about when he did a number of portraits of notable people for a television show. A producer called and said he needed one more. “Who?” Max asked. “George W.” came the answer.

“I go, ‘Great,’ and I paint him and send a copy to him (Bush). I sent a copy to his father, too,” Max said.
Despite his reverence for Clinton, Max had no harsh words about George W. Bush, or, for that matter, about anyone else.

His optimism shows through the primary colors of his acrylics and oils. “I see everything through rainbow eyes,” Max said.

Max noted in the interview that he knows George H.W. Bush.

“He’s a very sweet man.” Max said. “I think it’s very nice that he and Clinton have buddied up. That’s what America really is.”

Four paintings at the front of the third-floor gallery comprise a series of landscapes depicting the seasons. Max’s famous image of the word “Love” with a woman’s head in profile is there, along with Janis Joplin on a motorcycle, line drawings, posters and a corner with photos and text about his early life.

Max, 71, was born in Berlin, moved to Shanghai at age 1 and spent the next 10 years there.

“I discovered America from Shanghai,” Max said. He did so by first listening to American swing music on the radio, then through movies at a theater owned by the parents of a friend. Though he wanted to be an astronomer, Max took art classes because he was good at drawing.

Schooled as a realist, he soon found his way with abstract images that synthesized his fascination with the cosmos with his technical ability. His tenure as a starving artist lasted only a few months.

Max and his wife of 12 years, Mary – “She is why I was born!” – are to be on hand for booked-up events to mark Monday’s opening. Max will give a workshop for teachers, a lecture and will sign posters. The events are free but tickets were gone within a couple of hours of being made available. There were 250 people on the waiting list as of Thursday afternoon.

Clinton is due in Little Rock later in the week.

Max has had dozens of museum shows over the past 40 years, but he said placing his work at the Clinton Center is a career highlight.

“When Bill Clinton was elected, everybody in the U.S. was so enormously excited this good looking, energetic, tall, highly charismatic human being is going to be president of the United States,” Max said.

“As an artist, I like looking at him. Those facial manners, just how he is. Beloved by America. Also, of course, his intelligence,” Max said.
___