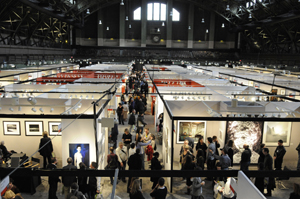 NEW YORK – The Association of International Photography Art Dealers (AIPAD) has announced that the AIPAD Photography Show New York, one of the most important international photography events, will be held March 18-21, 2010, at the Park Avenue Armory in New York City.

The 30th edition of the show will open with a gala preview on March 17. Approximately 75 of the world’s leading fine art photography galleries will present a wide range of museum-quality work including contemporary, modern and 19th-century photographs, as well as photo-based art, video and new media. The AIPAD Photography Show New York is the longest-running and foremost exhibition of fine art photography.

AIPAD has also announced the addition of eight new members to the nonprofit organization, comprising the world’s leading photography art dealers. The new members are:

Higher Pictures, New York City, focusing on mid-20th-century and contemporary work with an emphasis on historical revisionism in photography

“What’s interesting about these new AIPAD members is that they offer a wide range of specialties, from 19th century work to new media,” said AIPAD president Stephen Bulger, who is also president of Stephen Bulger Gallery, Toronto. “In these challenging times, working with the right dealer can make an extraordinary difference. These galleries offer collectors and institutions a superior level of expertise, connoisseurship and scholarship.”

Founded in 1979, The Association of International Photography Art Dealers (AIPAD) is celebrating the 30th anniversary of the organization in 2009. AIPAD represents more than 120 of the world’s leading galleries in fine art photography. The organization is dedicated to creating and maintaining the highest standards of scholarship and ethical practice in the business of exhibiting, buying and selling fine art photography. More information is available at www.aipad.com.

Shaving mugs: All in a day’s work for Susanin’s Auctions