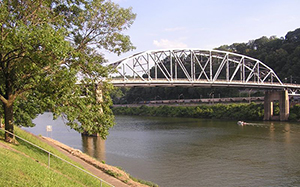 CHARLESTON, W.Va. (AP) – When it was announced the theme of this year’s Peer to Pier project was celebrating the state’s 150th birthday, Chris Nelson knew he had to participate.

A recent hot afternoon found him, paintbrush in hand, perched on a scaffold working on his concrete canvas. The pier, which supports a stretch of Interstate 64, stands on the corner of Pennsylvania Avenue South and Virginia Street.

It’s a good spot, as motorists waiting at the traffic signal on Virginia Street can get a long look at the painting he’s already worked on for more than 100 hours. It highlights his love of the state’s history.

A Confederate soldier sits atop a black horse with his sword at the ready to face off against a Union soldier standing with his pistol drawn. Two flags, the traditional U.S. flag and the Confederate national flag, are crossed behind them with a blue West Virginia and gray Virginia between them.

“West Virginia is really unique in that it was the only state formed out of another state in the War Between the States,” said Nelson, 43. “It was literally brother against brother out there. So these are my two brothers.”

The men both have brown hair, but their faces will not bear any distinct features, leaving them open to interpretation as any two brothers, he said.

A pensive President Abraham Lincoln is seen on the other side of the pier and behind him Presidential Proclamation 100, which he signed to grant West Virginia’s entry into the Union as a state. Nelson said he planned to paint the proclamation on the pier in its entirety so that it could be read.

Growing up in Raleigh County, one of his favorite classes had been eighth grade West Virginia history. He’d always enjoyed drawing but didn’t really get into painting until an art class at Independence High School, where his teacher helped him along. Even now, Nelson doesn’t consider himself an artist, though he will tell you he’s a bit of a painter.

This latest project, “House Divided,” is one he thinks both his eighth grade history and high school art teachers could be proud of. It’s also one he hopes school children and state residents will learn from.

Nelson submitted his proposal for the pier to Charleston City Council’s Strong Neighborhoods Task Force, which oversees the project, and was selected in May. Artists could begin on June 1 and were to be finished by July 31, though Nelson doesn’t think he’ll be done by then.

Other murals included Jeff Pierson’s detailed work on the “Fathers of West Virginia,” including Lincoln, and Charly Jupiter Hamilton’s colorful take “Battle of Charleston,” according to FestivALL Charleston’s website.

Nelson is familiar with the process, having painted a pier in the first phase of the public art project. His stylized sternwheeler can be seen along Washington Street.

He said his boss pushed him to participate in the project after he did a cartoon caricature of her, calling it the “Molly Llama.” She liked the picture, and after reading about the pier project in newspapers, she urged him submit a proposal for the Charleston project.

The imagined design took shape with the help of photos of Civil War re-enactors and a grid. He drew and colored the design on a grid and then used it as a guide on the pillar, a common method used by the project’s artists.

Nelson took the week of June 20 off from the state Department of Health and Human Resources, where he works as the director of the office of the inspector general, to work on the project. He worked 10 hours each day that week sketching the soldiers, cannons, flags and President Lincoln onto the concrete.

Since then, he’s worked weekends and evenings, weather permitting, on the painting. He said he enjoys working outside and that people often stop to talk to him about the painting. Most of the comments he said have been positive.

“Somebody stopped dead in the middle of the road last night,” Nelson said, gesturing over to Virginia Street. “It was a gold colored Pontiac. He yelled, ‘Hey man, that’s awesome.’ “

He said the work is moving along quickly now. He has detail work to finish and still has to put the script on the proclamation with Lincoln.

Nelson estimated his pier would be completed by the second week of August. 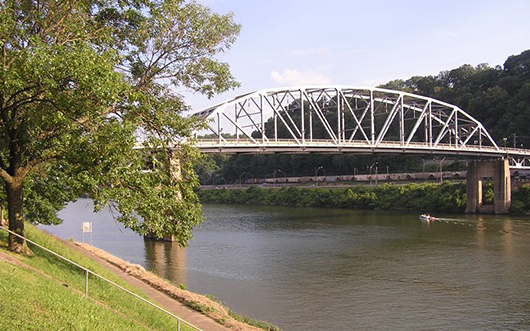