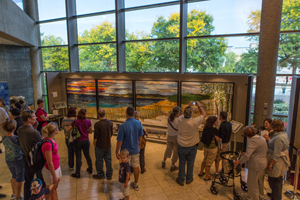 GRAND RAPIDS, Mich. (AP) – A quilter inspired by a Lake Michigan lakeshore near her home was declared the winner Friday of the $200,000 ArtPrize competition in Michigan.

It was displayed on a wall at the Gerald R. Ford Presidential Museum, one of 168 venues showing ArtPrize entries, but then was moved to an outdoor tent after the federal government shutdown closed the museum. Loveless said she has made art quilts for 10 years, but at 20 feet long, this was the biggest so far. She and her husband own State of the Art Framing & Gallery in Beulah, Mich.

“I have a feeling our gallery’s going to be really busy,” Loveless said in a telephone interview Friday night. “I’ll probably sell out of quilts, but I’ll make more. I’ll make more.”

She said she would use some of her winnings to buy fabric and a new sewing machine and to expand her gallery.

In a separate category, a jury of arts professionals awarded a $100,000 prize to Carlos Bunga for Ecosystem, made with cardboard, tape and paint. The work reimagines a gallery in the former Grand Rapids Public Museum. The Portguese-born artist, who lives in Barcelona, Spain, said he had to study and know the space very well to create the site-specific piece at SiTE:LAB in Grand Rapids.

Now in its fifth year, ArtPrize has put Michigan’s second-largest city on the international art map, thanks to a unique system in which artists and venues independently connect with each other using ArtPrize’s online portal.

It’s sort of like online dating for artists, or what ArtPrize executive director Christian Gaines calls “a self-sustained ecosystem.”

“ArtPrize is unique to any other art competition in the world, in that curatorial decisions, finalists and winners are ultimately generated by” that ecosystem, Gaines said.

The 2012 winner was Adonna Khare, of Burbank, Calif. She took home the top prize for her carbon-pencil-on-paper drawing called Elephants. 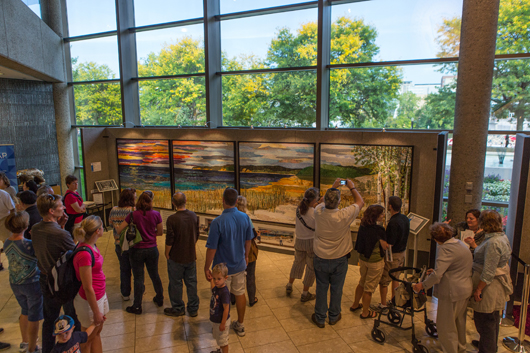 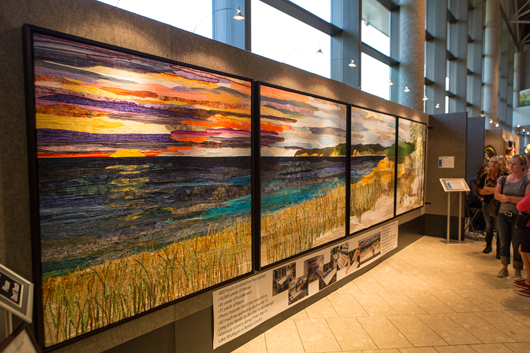