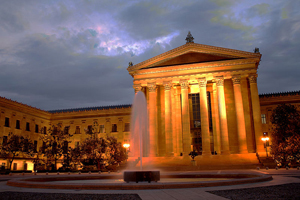 The Philadelphia Museum of Art, shown in this photo shot at night, is one of the city’s most-visited attractions. Photo by Nfutvol, taken April 30, 2010. Licensed under the Creative Commons Attribution-Share Alike 3.0 Unported license.

The “Creative Vitality in Philadelphia” report was released Monday and funded by a William Penn Foundation grant. It looked at arts-related jobs and community participation from 2006 to 2008.

It found that Philadelphia’s creative sector employs more than 17,000 people and has weathered the economic downturn better than other sectors of the economy.

Much of the report’s conclusions were based on a so-called Creative Vitality Index. That’s a numerical value based on data including employment and revenues of nonprofit and for-profit businesses, from museums to book stores.

The report said arts and culture are good for the economy and improve everyone’s quality of life.