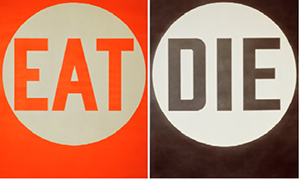 Love, as in his world-famous LOVE image—stacked letters with a tilted O—that became a symbol of the “make love, not war” 1960s counterculture revolution.

That one image eclipsed all his other work. But now the artist’s first major retrospective, titled “Robert Indiana: Beyond LOVE” at the Whitney Museum of American Art that opened Thursday could change that.

“It’s a dream come true, a little late,” Indiana, who turned 85 this month, said in an interview at the museum this week surrounded by 95 works he created over the past five decades.

The image both “blessed and cursed” him, said Barbara Haskell, the exhibition’s curator. It’s so famous and so ubiquitous—reproduced on everything from coffee cups to T-shirts without Indiana’s permission—that “it has obscured the depth and breadth of everything else he did.”

His paintings and sculptures are filled with images of highway signs, roulette wheels, circles, stars within circles, numbers and simple words—Eat, Die, Hug.

“The subtext of what he does is very profound. He really touches on issues of survival, forgiveness love and racial injustice,” Haskell said.

Indiana, who sat in a wheelchair but mostly uses a cane, said a favorite piece in the show is his monumental diptych EAT/DIE, an homage to his mother whose dying words to him were “Have you had enough to eat?” he said.

Born Robert Clark in 1928, Indiana changed his name in 1958 in honor of his home state. He was closely associated with the leading pop artists of the 1960s and first received acclaim when Alfred Barr, director of the Museum of Modern Art, purchased his American Dream 1 in 1961.

But Haskell said Indiana’s work is more conceptually layered than that of a Roy Lichtenstein comic book image or an Andy Warhol Marilyn Monroe silkscreen.

“There are myriad interpretations you can make on any one of his works.” she said.

Among his earliest works are anthropomorphic figures made from wood salvaged from warehouses that were being torn down in his lower Manhattan neighborhood in the early 1960s.

His themes are American. Some consist of stenciled lettering that reference words or phrases from classic American literature. Others address racism as in his powerful Confederacy Series—four paintings in which he uses stars to identify cities where violence occurred during the civil rights movement.

But there’s LOVE, too.

There are nine monumental LOVE sculptures, all original, in different colors and some slightly different in size. They are in New York, Philadelphia, Indianapolis, Bentonville, Arkansas, Scottsdale, Arizona, New Orleans, Singapore, Tokyo and Taipei, Taiwan.

In the exhibition, there’s a LOVE painting in the form of a cross and a small aluminum model that served as a template for all his other LOVE pieces. And there’s Electric Love, a monumental sculpture with tiny electric lights that move up and down until the entire piece glows—a psychedelic throwback to the days where it all started.

“It’s quite staggering,” Indiana said of the exhibition, which will travel to the McNay Art Museum in San Antonio, Texas, on Feb. 5. “I can’t believe I did all this work. I should be exhausted, and I am exhausted.” 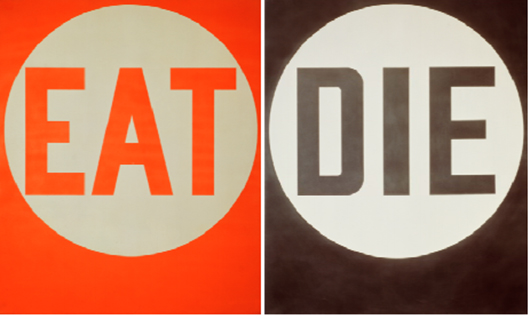 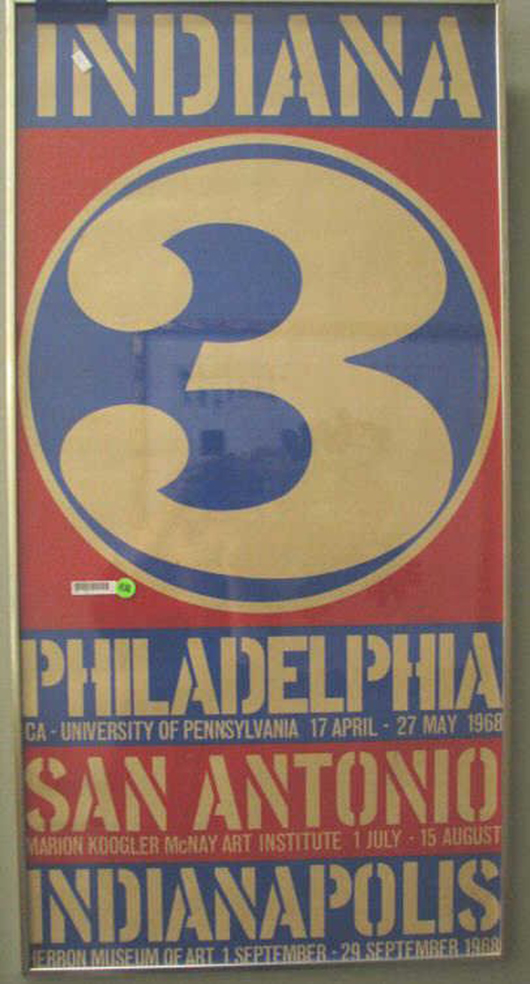