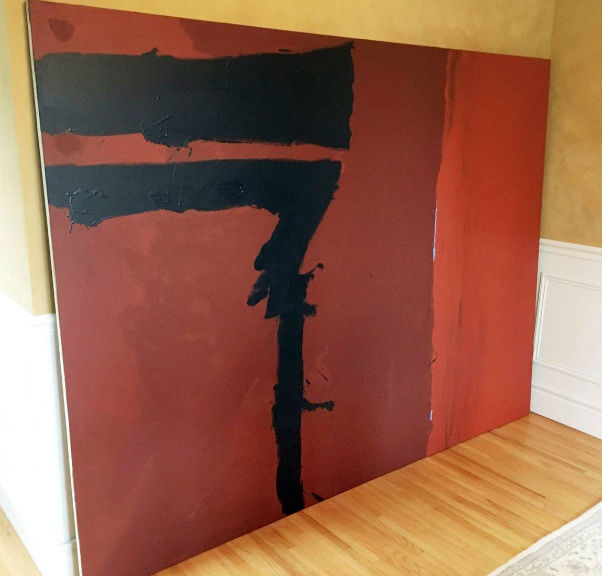 The Robert Motherwell painting that disappeared from a New York warehouse in 1978 has been returned. Image courtesy FBI

NEW YORK (AP) – A painting by the modernist master Robert Motherwell that disappeared from a New York warehouse in 1978 and was presumed stolen has been returned after 40 years, federal law enforcement officials announced.

U.S. Attorney Geoffrey Berman unveiled the 1967 painting, Untitled, at a Manhattan news conference on Thursday where he was joined by FBI officials who helped return the artwork to the foundation that owns the bulk of Motherwell’s artworks.

The 69-by-92-inch (175-by-234 centimeter) painting was one of several dozen that went missing at some point in 1978 from a warehouse where they were being stored.

Authorities said the painting was found last year in a garage in upstate New York by the son of a man who worked for the moving and storage company that Motherwell had hired.

The New York Times reports that the man was helping his mother sort through some belongings when he noticed the artist’s name on the back of the orange, crimson, blue and black canvas.

The man searched the Internet for information about Motherwell and contacted the Dedalus Foundation, which Motherwell set up in 1981 to educate the public about modern art.

The foundation contacted the FBI, which determined that the man’s father had worked at the moving company at the time the artwork disappeared.

The man who worked for the moving company died in the 1990s. Authorities don’t believe the son, whom they did not identify, knew that the painting was stolen.

William F. Sweeny Jr., the head of the FBI office in New York, said the bureau was “honored” to restore the painting to the foundation “so that those who appreciate the value of fine art may now come to know the true narrative of the painting’s past, present and future.”

Motherwell was an abstract expressionist painter and printmaker who was part of the influential New York School that also included Willem de Kooning, Jackson Pollock and Mark Rothko. He died in 1991.