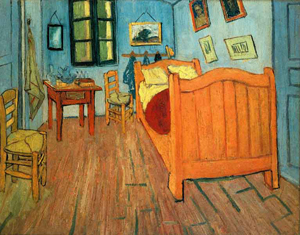 AMSTERDAM — Vincent van Gogh must have been horrified when he returned from the hospital to his studio in Arles early in 1889 to find one of his favorite paintings damaged by moisture.

He pressed newspaper to the canvas to protect it from further deterioration, and later rolled it up and sent it to his brother Theo in Paris.

Ella Hendriks could still see traces of newsprint when she looked at The Bedroom under a microscope, as she picked and scraped at earlier restorations of the canvas and removed yellowing varnish that had been brushed on 80 years ago.

Hendriks has completed a painstaking six-month restoration of the masterpiece, which returns to its place on the wall of the Van Gogh Museum on Friday.

“The idea is to create a sort of balance, a feeling of rest,” Hendriks said of her task.

The Bedroom is a familiar image. It has been reproduced in countless hotel rooms, on calendars and coffee mugs, and in art books on the Impressionists and post-impressionist period of the late 19th century.

Van Gogh liked it so much he painted two copies. One now hangs in the Art Institute of Chicago. A smaller version that he made for his mother and sister is in the Musee d’Orsay in Paris.

“When I saw my canvases again after my illness, what seemed to me the best was the bedroom,” the Dutch artist wrote his brother in Paris after several weeks in the hospital.

But he found paint was flaking from dampness following flooding in the street outside his house while he was gone. Moisture also caused the canvas to shrink, pulling apart some paint at the edges as it dried.

“It looks much fresher and brighter now,” said curator Leo Jansen. “It’s more … as Van Gogh intended it to be. It’s more peaceful.”

Van Gogh painted his own bedroom in what he called the Yellow House in the southern French town of Arles, where he had fled from the squabbling artist community of Paris. It was October 1888, in the midst of a critical six months that defined him as a painter, a period in which he also painted Sunflowers.

“He felt liberated in the south,” Jansen said in an interview. It was there that he “found those wonderful colors” and extraordinary original style.

At the end of 1888 Van Gogh began suffering a series of psychotic breakdowns. In 1889 he checked himself into an asylum in Saint-Remy where he stayed a year, producing 150 paintings, among them some of his most stunning works. After he left, despair continued to stalk him, and he died in 1890 from a self-inflicted gunshot wound. He was 37, and his career spanned just 10 years.

The Bedroom has been restored several times, most recently in 1931 and retouched by the same man 27 years later. Successive restorers tried to retouch the cracks, each time covering up a bit more of the original paint, Hendriks said, pointing to flaw lines in the unframed work as it stood on an easel in her laboratory.

After Van Gogh’s death, a layer of glue-paste and canvas was ironed onto the back of the original canvas to make it more firm — Van Gogh suggested it himself — and in 1931 this process was repeated with a wax-resin adhesive. A layer of varnish was applied to the painted surface for the first time. Over time, these actions served to dull the vibrancy of color and flatten the spacial appearance.

Hendriks gently cleaned off most of the varnish with solvents. Then she scratched off microscopic layers of old overpaint with a surgical scalpel and used Japanese toothpicks to pluck out residues of varnish.

She discovered two white points of light that had been painted over, apparently because the earlier restorer had misunderstood Van Gogh’s intention to show pinpoints of reflected sunlight from partially opened shutters.

As she worked, she and other experts at the museum kept a blog detailing their progress, their discoveries and the choices they faced. The blog had 115,000 page views over the life of the project. Nearly one-third of the viewers were from the U.S. and another third from the Netherlands.

There was no ambition to make the painting exactly as Van Gogh had painted it.

“You’re always weighing up the advantages and disadvantages, what’s safest for the painting, how was the painting meant to look, what impact will it (restoration) have,” she said. And her work is reversible if ideas change.

“We don’t want to retouch everything. We want to show that the painting has a history and achieve much more of a balance,” she said. “We don’t have the illusion that we should return the picture to an undamaged pristine state.”

Hendriks, who has worked on restorations at the museum for 11 years, said she felt “privileged” to work on The Bedroom. “Just the fact of looking at this painting over such a long period of time, millimeter by millimeter — it was a fantastic experience.”

Still, you get used to it. “I wouldn’t say that it’s intimidating. That’s the work that I do.”

Univ. of Wyoming receives largest estate gift in its history
Scroll to top