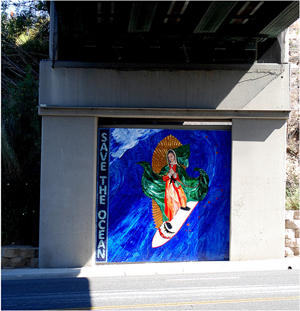 ENCINITAS, California (AP) – The surfing Madonna appeared just before Easter weekend and has been stirring a soulful debate in this Southern California beach town ever since.

The striking mosaic of the Virgin of Guadalupe riding a wave was affixed to a wall under a train bridge by artists disguised as construction workers in April. It technically is graffiti that should be removed under the law.

But the surfing Madonna’s beauty is drawing a following, and even city officials who say she must go acknowledge they too have been taken by her. They have spent thousands to hire an art conservation agency to find the best way to remove her without causing damage.

The 10-by-10-foot (3-by-3-meter) rock and glass mosaic poses an interesting dilemma over whether a city should spend lots of money to get rid of artwork that is illegal but well done and actually beautifies a place.

Deciding what is graffiti is a growing debate worldwide with guerrilla artists gaining respect in established art circles. A number of museums have brought the street art indoors for prestigious exhibits in recent years, while pieces of illegal art snatched up by dealers have been fetching hefty sums.

A Los Angeles show billed as the first major museum exhibit of street art at the Museum of Contemporary Art in Little Tokyo sparked a similar debate last month when unauthorized etchings started showing up on buildings in the neighborhood. The exhibit included Chaz Bojorquez’s stark, black-and-white “Senor Suerte” drawings, once a fixture on the concrete-lined waterways of Los Angeles, and the colorful “Howard the Duck” murals that Lee Quinones covered New York City with in the 1970s.

Support for the wave-riding Virgin has only flourished amid the controversy. She is now on Twitter and Facebook, pleading for help: “I’m the Surfing Madonna. Cherished public mosaic. Hangin’ in Encinitas. Hoping to become famous enough to be saved.”

Jack Quick, a local art dealer, saw the men in hard hats put up the mosaic in daylight just days before Easter. He estimates it cost $1,000 in materials and more than 100 hours to build it. The city does not know which artist or artists did the work. No one has stepped forward.

Inside a piercing blue wave, Our Lady of Guadalupe balances on a white surf board decorated with the angelic face of Juan Diego, the indigenous boy who is said to have seen the Virgin on a Mexican hillside in 1531. Her vibrant green robe curls up around her as if blowing in the sea breeze as she surfs with her iconic serene face. Down one side are the words: “Save the Ocean.”

Thousands of people have come to see the artwork. Some have brought flowers and lit votive candles on the sidewalk under her.

Artist Jules Itzkoff was among those who have visited the mosaic. He said he was captivated by the “piece of glassy vandalism.”

“It’s just interesting when a piece of vandalism pops up that’s so beautiful and so different that it doesn’t resemble what we normally think of as graffiti,” Itzkoff said. “It should be an important landmark for graffiti artists: Somebody in their community has created something that the city actually likes! Surfing Madonna speaks for the future of graffiti art in America. The goal could be to create work that society wants to keep.”

But he admits: “That’s a bit idealistic.”

It’s also unrealistic, says Encinitas Mayor James Bond, and would put city officials in the position of deciding the taste of Encinitas, which has about 63,000 residents. He added the mosaic’s religious connotations also have drawn complaints.

Some say the artwork blurs the line between church and state; others consider it sacrilegious to have Mexico’s patron saint pictured surfing.

“We can’t just go around saying, ‘Well, when someone slaps up something nice, we like it and it can stay.’ Or, ‘Oh, we don’t like it, so we’ve got to take it down,”’ Bond said. “We can’t do that with art because people always love and hate the same piece of art. So it’s a slippery slope.”

It also could quickly get out of control in a town like Encinitas that is full of artists, he said.

The city is covered with public artwork, including an infamous bronze statue depicting a surfer boy on a wave that has come to be known as the Cardiff “Kook.” The statue got the name from people in the local surf community from nearby Cardiff by the Sea who started poking fun at the artwork because they thought the boy’s delicate hands pointed upward seemed effeminate. People have been dressing up the statue for years to reflect the day’s news or holiday season – it recently donned a curly wig and dress for Oprah’s departing show – sending crews out regularly to clean it up, Bond said.

Bond says the city does not want to be a “Gestapo” and go after the light-hearted pranksters whose stunts are easily removed, but the surfing Madonna sets a dangerous precedent.

The Los Angeles-based art conservation agency, Sculpture Conservation Studio, on Tuesday began testing ways to safely remove the mosaic. Its workers told reporters standing nearby that they saw a name under the colorful glass but didn’t know if it belonged to the artist.

The agency concluded in an earlier report that there is no better spot for the Surfing Madonna than under the overpass, protected from the sun and rain. The artwork is stuck to the concrete wall with a strong epoxy glue.

“Its lifespan here may be longer than if put elsewhere,” the agency said in its report to the city.

Bond expects moving the mosaic will be costly, but local businesses are raising funds to cover the city’s expenses. And several people have offered to buy the artwork.

Although it’s graffiti, the City Council wants the mosaic to be relocated to a place where the public can continue to view it.

City workers, meanwhile, have been busy cleaning up other unauthorized art – including a painting of a monster’s face that turned up under train tracks in a separate part of town shortly after the Surfing Madonna. That painting was whitewashed in 24 hours with not a word of protest.

“That was really easy to accomplish,” said Dody Crawford, executive director of the Downtown Encinitas Mainstreet Association. “It didn’t have the beauty that the Surfing Madonna has. It’s just so darn beautiful.” 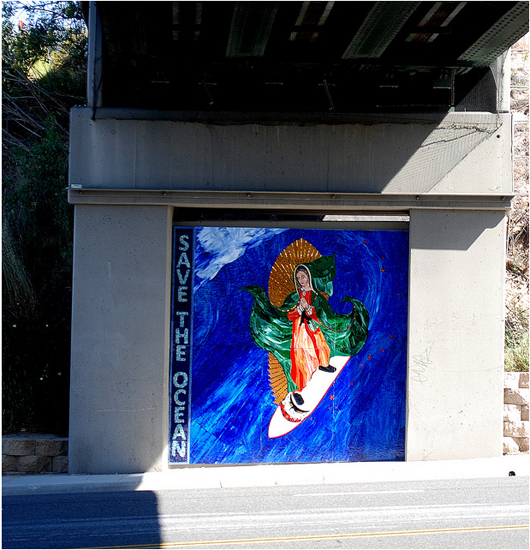