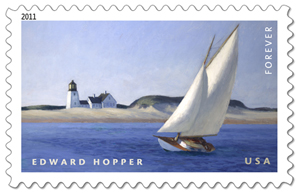 The stamp is being unveiled at a first-day-of-issue ceremony this week in Provincetown.

Hopper, who died in 1967, was a summer resident of nearby Truro.

His 1935 oil painting, The Long Leg, is a sunlit view of a boat sailing against the wind in waters near the Long Point lighthouse at Provincetown. The work is in the collection of the Huntington Library in San Marino, Calif.

Few American artists are as popular or influential as Edward Hopper, whose beautiful, sunlit painting is the 10th entry in the American Treasures series. The work’s title refers to sailing; a leg is one part of an alternating, zigzagging series of short and long tacks.

This painting, from around 1930, shows Hopper’s characteristic use of light to insulate objects, and reflects his love of the sea as well as his interest in architecture. The boat is a “knockabout” sloop, a type of craft commonly used for sailing, cruising and fishing.

Hopper was born on July 22, 1882, in Nyack, N.Y. He determined early that he wanted to be an artist, and studied the works of the Impressionists. He was particularly taken by their use of light and pattern. Hopper spent most of his summers on Cape Cod, living the remainder of the year in New York City, where he died in his studio in May 15, 1967, at the age of 84.

Many viewers sense loneliness and an unresolved tension in Hopper’s paintings. The Long Leg portrays an appealing scene of leisure, yet there are no people visible in the boat or on land.

This stamp is being issued as a Forever stamp. Forever stamps are always equal in value to the current first-class rate.

Wednesday’s ceremony is at the Pilgrim Monument and Provincetown Museum. 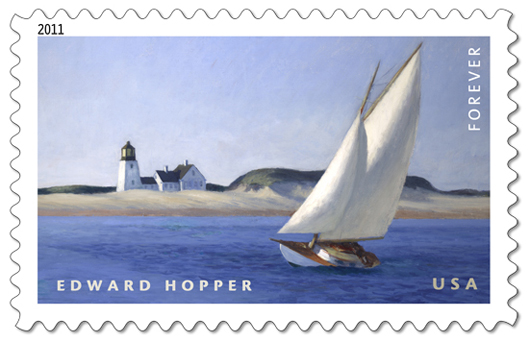 Inspiration for Memphis Belle to be memorialized

Sotheby’s, Christie’s in contention for Still’s paintings
Scroll to top