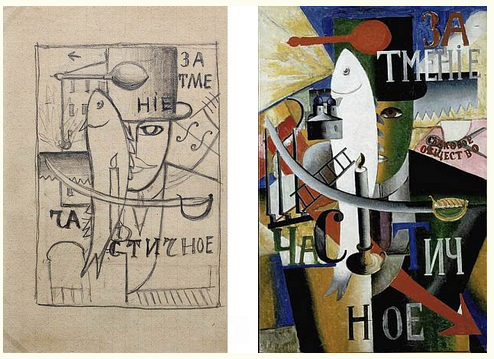 AMSTERDAM – The Stedelijk Museum Amsterdam, custodian of the largest Kazimir Malevich collection outside the Russian Federation, has made an exciting discovery. A Malevich drawing came to light during an inventory of the Khardzhiev Collection at the Stedelijk. The find is a previously unknown preliminary drawing for Malevich’s iconic painting An Englishman in Moscow (1914), one of the highlights of the Stedelijk collection.

The Khardzhiev Collection is composed of a collection of Russian avant-garde art and the art historical library of the Russian literary scholar Nikolai Khardzhiev (1903-1996), and has been housed at the Stedelijk since 1998. In 2013-14 the bulk of the collection was the subject of a major Malevich retrospective at the Stedelijk, Tate Modern and Kunsthalle Bonn.

Over the last 20 years, the Stedelijk has conducted extensive research into the Khardzhiev Collection. While carrying out an inventory of Khardzhiev’s library, Geurt Imanse, former Head of Collections at the Stedelijk and an expert on the Russian avant-garde, discovered the 14×10 cm drawing tucked away among the pages of a monograph Khardzhiev had written on artist Pavel Fedotov. The newly found drawing and the painting An Englishman in Moscow date from what is known as Malevich’s ‘alogical’ period, when the artist created work in a process that defied pictorial convention or logic. Objects and shapes are divorced from reality, and superimposed in an unorthodox composition. This painting is the first step towards Malevich’s new, non-representational style, Suprematism. Included in the drawing and painting are the words “partial eclipse.” Malevich, eager to blot out the traditional aesthetic, believed in the necessity of a total eclipse. In which sense, the Englishman peering out of the darkness is a distant cousin of the famous black square of 1915.

Director of the Stedelijk Beatrix Ruf is thrilled by the discovery: “Dating from 1914, this drawing on squared paper is the missing link in the series of drawings we included in the 2013 catalogue Russian Avant-Garde The Khardzhiev Collection. The drawing is clearly a sketch for the painting An Englishman in Moscow, which is in our collection. This discovery not only affirms the importance of research, it also demonstrates the powerful synergy between our Malevich collection and the Khardzhiev Collection.”

Marcel de Zwaan, chairman of the Khardzhiev Foundation: “There’s something touching about this find. Not simply because it’s a beautiful drawing, but because it could almost be seen as a ‘hidden’ portent of the fruitful relationship that would arise between the foundation and the Stedelijk.”

The drawing will be unveiled on June 2, when it goes on public display, marking the first edition of the Khardzhiev Symposium, held at the Stedelijk Museum on June 2-3.