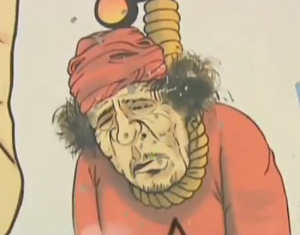 BENGHAZI, Libya (AFP) – Muammar Gaddafi pumping petrol into a winged camel, Gaddafi with the tail of a snake and a forked tongue, Gaddafi as Dracula.

The flamboyant Libyan strongman is fueling a flourishing cartoon caricature scene in the rebel stronghold of Benghazi. Those are just a few of the themes produced by a group of young artists who reached not for their guns but for their colored pens and spray cans when Libya’s revolution kicked off in mid-February. One of them paid for it with his life, gunned down by secret police.

The group now goes by the name of their dead colleague, Qais al-Halali, and continues its work from a ramshackle office in a makeshift media centre next to the rebel headquarters on the city’s seafront.

“We draw caricatures here and then distribute them around the city. We give them to people to show at demonstrations or hang on walls,” said Akram al-Bruki, 32, who uses the moniker Kimo to sign his work.

Bruki took out two commemorative posters of Halali, one showing a picture of his fresh-faced late colleague, the other showing the bruised and bloodied head of a dead man.

“He got a message to stop,” delivered by Kadhafi’s forces before they were chased out of the eastern city. “But he didn’t stop. When we started doing this we swore that no-one would stop us.”

The secret police finally caught up with Halali in late March, shooting him dead as he drove up to a checkpoint, said Bruki.

Bruki and his three colleagues vowed afterwards to step up their production to play their part in trying to bring about the downfall of the man who had ruled their country since before they were born.

“We didn’t go to the front. We fight with pictures and words,” said Ahmed Ahreb, 33, who writes captions and speech bubbles for the cartoons his friends make.

The walls of their office and of the whole media centre were jammed with their pictures and nearby buildings are daubed with graffiti and grotesque depictions of Gaddafi.

On the wall behind Bruki was a picture of Hosni Mubarak, the ex-president of Egypt who was ousted in a popular uprising in February, presenting a tray of drinks to Gaddafi.

“Take some Red Bull to help you fly,” says the speech bubble above the Egyptian.

“I’m not the kind who flies. I’m going to stay,” replies the Libyan.

Bruki said that the eccentric Gaddafi, with his jowly face, bushy hair, colourful clothes and penchant for glamorous female bodyguards, was an easy target for satire.

He pointed to his own favourite caricature on a wall in the media center corridor.

“Gaddafi Cats” was the slogan above a drawing of the strongman snuggled up between two buxom women bodyguards in green army uniforms and red berets.

Bruki produced a folder with several drawings he had just finished, which he said were being sent to Egypt to figure in an exhibition there before going on to another show in Qatar.

He also proudly took out his mobile phone to display a photo of himself spray-painting a cartoon of the leader he hates on the wall of an army barracks in central Benghazi.

“It was really dangerous to do this at the time because the secret police were in the streets,” he said.

He said he was convinced his group’s work not only boosted morale in rebel-held areas but that it also unnerved Gaddafi, whose forces control the western half of the country.

“Gaddafi definitely sees them and they make him nervous. Many journalists have come here and filmed us or wrote articles about us, and he will see that on the television,” he said.

Click here to view a YouTube video of a Repubblica Radio TV/TM News Italian-language news story about Qais al-Halali, a graffiti artist who was executed by Libya’s secret police for his unflattering portrayals of Muammar Gaddafi:

Provincetown course designed to give direction to artists

Venice turns to floating barriers to ward off flood threats