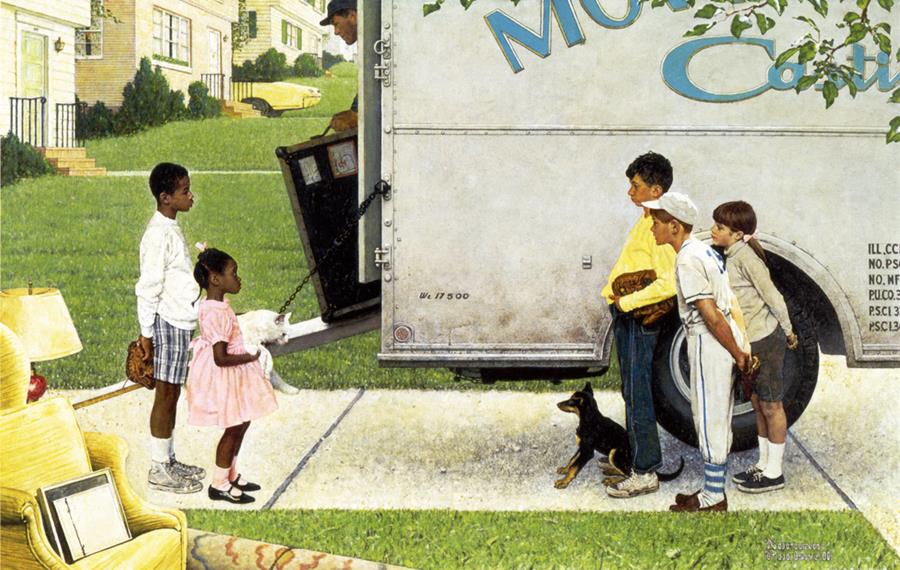 GLENS FALLS, N.Y. – The Hyde Collection will present “Norman Rockwell in the 1960s,” an exhibition that showcases 21 illustrations and original magazine covers created by the beloved artist during a decade of change and turmoil. The show will open on Saturday, Jan. 16, and continue through Sunday, April 3.

Organized by the Norman Rockwell Museum in Stockbridge, Mass., the exhibition traces Rockwell’s artistic transformation from a painter of people and life’s small but extraordinary moments, to a powerful visual commentator who united America around such core national values as democracy, freedom and justice.

A short documentary film titled American Chronicles: The Art of Norman Rockwell, narrated by Rockwell’s son, Peter, will be shown during the exhibition.

Rockwell (1894-1978) was a masterful painter whose popular visual narratives appeared on the covers and pages of the nation’s most prominent periodicals for seven decades. Rockwell called himself a reporter on present events and of contemporary America. The media referred to him as “the people’s painter,” “a contemporary Currier & Ives,” and “the Dickens of the paintbrush.” Rockwell’s hopeful and admiring attitude toward humanity was the hallmark of his work; above all, he loved to paint pictures conveying stories about people and their heartfelt engagement with one another.

In the 1960s, leaving behind the beloved storytelling scenes that appeared on the covers and pages of the nation’s prominent periodicals, Rockwell threw himself into a new genre—the documentation of deeply felt social issues.

In 1963, after ending his 47-year association with The Saturday Evening Post, Rockwell began work for the reportorial magazine Look with a true sense of purpose. He invited consideration of important social issues including the Space Race, depicting the moon landing before and after it actually happened. His 1964 painting, The Problem We All Live With, gently presents an assertion on moral decency. This first assignment for Look magazine was an illustration of a six-year-old African-American schoolgirl being escorted by four U.S. marshals to her first day at an all-white school in New Orleans.

In 1965, Rockwell illustrated the murder of civil rights workers in Philadelphia, Mississippi, and in 1967, he chose children, once again, to illustrate desegregation, this time in the nation’s suburbs.

“Norman Rockwell’s work from the 1960s represents a transformative moment in his career at a critical time in our nation’s history,” said Erin Coe, director of The Hyde Collection.

Born in New York City in 1894, Rockwell found his identity as an artist during childhood, and studied illustration and drawing at the Art Students League. He became art director of Boy’s Life magazine at the age of 19 and published his first Saturday Evening Post cover in 1916, when he was 21 years old. During his long career with the Post, the magazine featured 323 Rockwell covers, and many story and advertising illustrations.

In 1977, Rockwell received the Presidential Medal of Freedom for having portrayed “the American scene with unrivaled freshness and clarity,” and with “insight, optimism and good humor.”

For more information about the exhibition and related events, visit the museum’s website: www.hydecollection.org or call 518-792-1761.