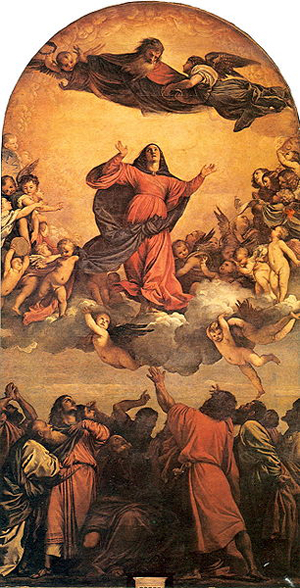 This masterpiece by Titian (Italian, probably b.1488/1490, d. circa 1576), an oil painting titled Assunta, is a dynamic three-tier composition whose color scheme established the artist as the preeminent painter north of Rome. It took Titian two years to complete the painting, which is held at Santa Maria Gloriosa dei Frari Church in Venice. Source: The Yorck Project.

KIEV, Ukraine (AP) – The director of a Ukrainian museum claimed Tuesday that a portrait of a Venetian Doge in its collection is a work of Titian, even as an expert warned that it is art historians who are best placed to make that call.

The portrait is part of a collection of the Museum of Western and Eastern Art in the Black Sea port of Odessa headed by Ostrovsky, where in July 2008 Caravaggio’s The Taking of Christ, also known as Judas’ Kiss, was cut from its frame and stolen. That painting is still missing.

“Now we are nearly 100 percent certain that God has compensated us for the terrible loss that we suffered last year,” Ostrovsky said in a telephone interview.

But Sergei Androsov of the State Hermitage’s department of western European art said that only art historians can determine whether the painting is Titian’s.

“The analysis shows that the canvas matches Titian’s historical period, that the paint used matches his paint, that certain technical attributes match up,” Androsov told The Associated Press. “But based on that it is impossible to judge whether the painting is a Titian. That is the work of art historians, not technical experts.”

“We know it is a 16th-century Venetian painting, most likely either by Titian or Tintoretto,” Kosolapov told the AP. “But right now it is not fully clear.”

Ostrovsky said they have invited art scholars from Moscow to further analyze the work. He did not allow the painting to be photographed in Odessa.

After the theft of the Caravaggio the museum is taking extra security precautions with the painting, but will still send it for exhibition abroad if its authenticity is confirmed, Ostrovsky said.

“Some people told us not to do anything with the Titian. But as they say, you can never stroll in the forest if you’re always afraid of wolves,” he said.