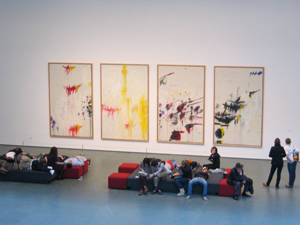 People "collapsed" at the Museum of Modern Art, New York, in front of the Cy Twombly series of paintings titled The Four Seasons: Spring, Summer, Autumn and Winter, 1993-94. Photo by Allie of Valence, France. Courtesy Wikipedia.

American contemporary artist Cy Twombly had something different in mind – something simple.

Twombly, the first artist given the honor of decorating a Louvre ceiling since Georges Braque in the 1950s, came up with a geometric design _ a deep blue background punctuated with floating disks and emblazoned with the names of sculptors from ancient Greece.

The 400-square-meter (4,300-square-foot) ceiling, inaugurated Tuesday, floats over a gallery of antique ronzes like a deep blue sky. It opens up the long gallery but doesn’t overpower it, as was Twombly’s intent.

Culture Minister Frederic Mitterrand named the artist a knight in the Legion of Honor at the work’s inauguration, saying the ceiling reminded him of “the sea, allied with the sun.”

Twombly, who has lived mostly in Italy since 1959, is best known for his paintings reminiscent of graffiti or doodling. The color blue is unusual for him.

“I got into something new in old age,” he said.

The Lexington, Virginia-born artist said he was inspired by the colors he found in a Chinese print as well the blue of early Italian Renaissance artist Giotto, who used paint made from lapis lazuli.

“I was just thinking of the blue with the disks on it, it’s totally abstract … I put all the great Greek sculptors’ names on the top. It’s that simple,” Twombly told The Associated Press.

Reacting to praise from a fan, Twombly responded with characteristic modesty: “I think it works all right.” The artwork, painted with assistance from several other artists, was created in a warehouse outside Paris before it was affixed to the Louvre ceiling in pieces, like wallpaper.

To see Twombly’s work, Louvre visitors pass through a room decorated with Braque’s ceiling, representing black birds against a starry midnight-blue sky _ one of the few 20th century additions to the museum before former President Francois Mitterrand commissioned I.M. Pei’s glass pyramid in the 1980s.