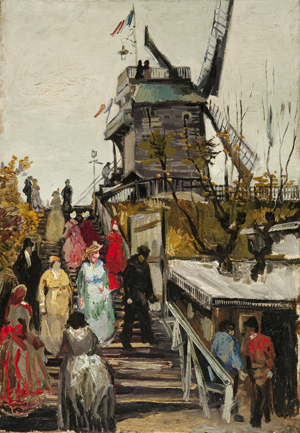 AMSTERDAM (AP) – A newly authenticated Van Gogh has gone on display 35 years after a discredited art collector bought it in Paris, convinced it was painted by the famed Dutch master but never able to prove it.

Louis van Tilborgh, curator of research at the Van Gogh Museum in Amsterdam, said Le Blute-Fin Mill was painted in 1886. He said its large human figures are unusual for a Van Gogh landscape but it has his typically bright colors.

It was bought in 1974 by Dirk Hannema, who was known as a brilliant museum curator but much less successful when buying for his own collection. When he died in 1984 he claimed to have seven Vermeers, several Van Goghs and a few Rembrandts.

He was right only about this one.

On the basis of his knowledge and intuition, he attributed the painting to Van Gogh and dated it as having been realized in 1886. However, due to Hannema’s dubious reputation in the field of attribution, this work did not receive much attention. “This discovery is not an attribution but an absolute certainty,” Hannema assured everyone. Exactly 35 years after his purchase, he has finally been proven right.

The painting went on show Wednesday in the Museum de Fundatie in the town of Zwolle.

Comprehensive study by the Van Gogh Museum established that the painting is genuinely a work by Van Gogh. Dr. Louis van Tilborgh, curator of the Van Gogh research, and Ella Hendriks, head of the restoration department, who are both affiliated with the Van Gogh Museum, explain the attribution in De ontdekking – Vincent van Goghs De Molen ‘Le blute-fin’ in de collectie van Museum de Fundatie (Waanders Publishers), of which The Burlington Magazine will publish an English language version in June.

The exhibition arranged around this newly discovered work by Vincent van Gogh will be on display in Museum de Fundatie – Paleis aan de Blijmarkt, Zwolle, until July 4. Besides Le Blute-Fin Mill, two paintings by Van Gogh that are similar in style (on loan from the Van Gogh Museum and the Noro Foundation), and one by Arnold Hendrik Koning (from the collection of the Van Gogh Museum) will also be presented. In addition, the exhibition will also show other works that Hannema acquired from Hein Art Dealers, including paintings by Huet and Troyon, drawings by Redon and Millet, late medieval sculpture, and a figure by Degas.