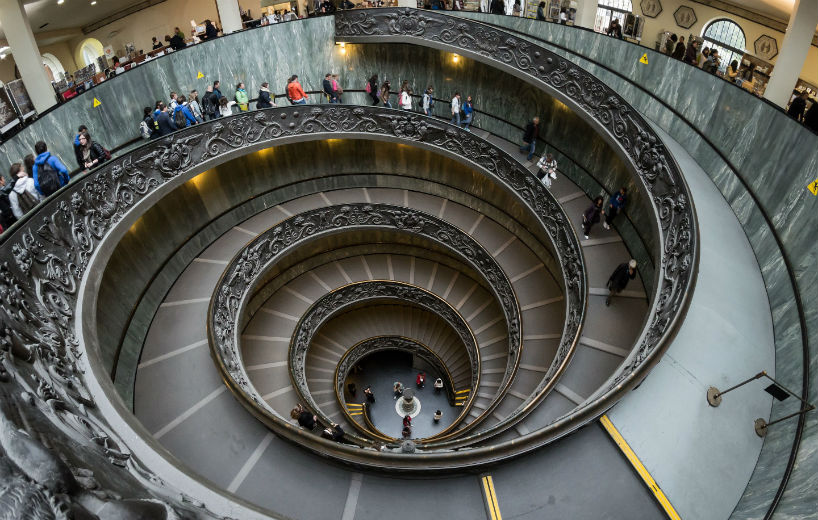 The double spiral staircase designed by Giuseppe Momo, sculpted by Antonio Maraini and made by the Ferdinando Marinelli Artistic Foundry for the Vatican Museums in 1932. Image by Colin / Wikimedia Commons / CC BY-SA 3.0. This file is licensed under the Creative Commons Attribution-Share Alike 3.0 Unported license.

VATICAN CITY (AP) – The Vatican and China are planning a first-ever exchange of artworks for exhibits in China and the Vatican Museums, as the two states forge ahead with soft diplomacy amid a stalemate in negotiations to heal decades of diplomatic estrangement.

The parallel exhibits announced Tuesday, involving an exchange of 40 works of art from the Vatican’s collection of Chinese bronzes, ceramics, cloisonne and paintings, and 40 works from China, are due to open simultaneously in March in the Forbidden City and the Vatican’s Anima Mundi ethnological museum.

The head of the government’s China Culture Industrial Investment Fund, Zhu Jiancheng, told a Vatican news conference that he hoped the exchanges would reinforce friendship, build mutual trust and “contribute to the normalization of diplomatic relations.”

The dual exhibitions would “open a new era in people-to-people exchanges between China and the Vatican,” he said. The exhibit in China will travel to four other cities after its Beijing inauguration, including Xian and Shanghai.

The investment fund is a Chinese government and Communist Party vehicle for monetizing soft power initiatives in media, culture and exhibitions. Its shareholders include the Bank of China, the Ministry of Finance and China International Television Corporation, which operate under orders from China’s Cabinet, the State Council, and the ruling party’s Central Committee led by President Xi Jinping.

Pope Francis, and before him Pope Benedict XVI, has made normalizing relations with China a priority. But the Vatican and China remain at odds over the Vatican’s insistence that the pope have the authority to name bishops. China views the Vatican position as an infringement on its sovereignty.

Scholars and human rights activists say they only expect Xi’s attitude toward religious and ethnic minorities to become tougher following his appointment to a second term as party leader during the recent party congress.

Vatican Museum officials declined to enter into the diplomatic standoff, or hopes that it might end, during Tuesday’s news conference announcing the initiative, deferring to their Chinese guests.

But the head of the Vatican Museums, Barbara Jatta, said beauty and art were an “extraordinary vehicle for dialogue.”

China cut relations with the Holy See in 1951, after the Communist Party took power and set up its own church outside the pope’s authority. China has an estimated 12 million Catholics, many of whom worship in non-state sanctioned congregations faithful to the pope that often overlap with the government-sanctioned church.
___