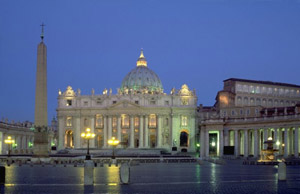 VATICAN CITY (AP) – The Vatican appealed to experts worldwide to volunteer to restore paintings and other treasures from churches devastated in quakes this week in central Italy.

Francesco Buranelli, a senior official of the commission that cares for the Vatican’s cultural wealth, told The Associated Press Wednesday he hopes restoration laboratories will “adopt” damaged objects from churches in the mountain town of L’Aquila and surrounding countryside.

In Monday’s 6.3-magnitude quake, with its epicenter near the medieval city, church belltowers toppled, cupolas broke apart and in some cases, entire churches were reduced to piles of stone, dust and wood.

Damage was so severe to L’Aquila’s churches “that at the moment, none of them can be used” by the faithful, said the Rev. Ciro Benedettini, a Vatican spokesman.

Laboratories abroad could restore such precious objects as crucifixes, paintings on canvas or wood, chalices and altar cloths. Other damaged parts, such as wall frescoes or domes, which could not be flown around the world for restoration, would be cared for by Italian experts, Buranelli said.

“Already we have received a series of e-mails from experts offering their willingness to sponsor” an artwork or other church treasure, he said in a phone interview.

Buranelli, who is a former director of the Vatican Museums, said the Vatican could serve as a kind of clearing house for these offers, he said.

Italy’s population is predominantly Roman Catholic. The Vatican’s initiative is a tribute to the deep religious faith of the people of the region of Abruzzo, Buranelli said.

Italy’s basilicas, cathedrals and chapels boast some of the world’s finest art treasures, including medieval, Renaissance, Baroque, paintings and sculptures. Wooden altar carvings, crucifixes and mosaic-covered floors and arches are also part of the artistic heritage Christianity left in Italy.

The Vatican Museums’ own restoration lab is renowned.

In 1997, after a powerful quake rocked the Umbrian hill town of Assisi and nearby towns, museum experts donated their services to restore a 15th crucifix in one of the churches, said Maurizio De Luca, in charge of painting restoration at the museums.

Buranelli indicated the Vatican’s restoration experts would also use their skills and technology for the Abruzzo quake damage.

Premier Silvio Berlusconi has suggested that the United States could help restored quake-damaged art treasures, including those in churches.