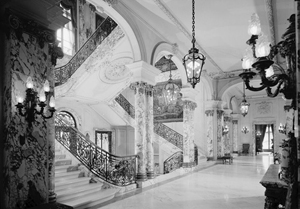 NEWPORT, R.I. (AP) – The dining room of one of Newport’s best-loved mansions, The Elms, has been restored to its original appearance as a series of early 18th-century Venetian paintings that were the basis for the room’s design have been reunited for the first time in 50 years.

The 10 paintings were commissioned by the Corners, a prominent Venice family. They depict scenes from the life of the Roman General Scipio Africanus, from whom they claimed ancestry, as well as scenes depicting the Corner family’s deeds in service of Venice. The collection is the most complete series of Venetian history painting outside of Venice, said John Tschirch, director of museum affairs at the Preservation Society of Newport County, which runs The Elms and several of Newport’s other famed mansions.

Six artists are believed to be represented, including Sebastiano Ricci, Antonio Molinari and Giovanni Antonio Pellegrini.

The Elms sits on Bellevue Avenue, the tree-lined artery that runs past many of the city’s most splendid Gilded Age homes. It was built in the late 19th and early 20th century at a cost of $1.4 million by Philadelphia architect Horace Trumbauer as a summer residence for Edward Julius Berwind, a coal magnate, and his wife. The interior was designed by Allard of Allard and Sons of Paris, which obtained the Venetian paintings for the house. They designed the dining room around eight of the paintings, while two were hung in the mansion’s front entryway.

Some of the paintings were almost lost in the 1960s when a relative who inherited the home decided to sell it, said Trudy Coxe, executive director of the preservation society. The four largest paintings, two in the entry hall and two in the dining room, each around 12 feet by 12 feet, were sealed to the walls with white lead and so could not be removed without being destroyed.

The house was sold to a developer and the contents were sold at auction in June 1962, including the six Venetian paintings that could be removed.

“Ever since that fateful June day, we have been trying to get those paintings back,” Coxe said.

The sale mobilized a group of concerned citizens who did not want to see The Elms bulldozed and replaced by a shopping mall. They raised $100,000 to buy it and opened it to the public. In 1996, it became a National Historic Landmark.

Over the years, the society was able to reacquire many of the treasures and furnishings from the mansion, including the dining room table, which was being used by Brown University as a conference table. In 2004, the society struck a deal with the New York art dealers Wildenstein & Company to purchase four of the paintings for $250,000 total.

But two, both done by Ricci and considered the finest, remained at Wildenstein. The pair together were valued at more than $1 million, too much for the society to afford.

Finally, this year, thanks to a small group of donors, they were able to strike a deal for the two: $650,000, the largest purchase the society has ever made.

The return of the final two paintings, and their installation over two doors in August, returned the room to its original splendor.

Before their return, “it would have been a pretty room,” Coxe said. “Now, it’s magnificent.”

Many of the room’s elements were designed with a nod to Venice and the Ca’ Corner, the mansion where the paintings originally hung. Those details include the cast plaster ceiling complete with the winged lion of St. Mark’s, geometric patterning on the doors, finely crafted sideboards and a marble mantelpiece.

Now that the paintings are together in the same place, art experts can begin to study them in full. It’s not definitively known who painted some of the works, and reuniting them makes answering that and other questions possible, Tschirch said.

“It rarely happens, the reuniting of art on this scale,” Tschirch said. “Once you reunite a series of historical paintings, you can do a critical appraisal. This is what’s fascinating the art world.” 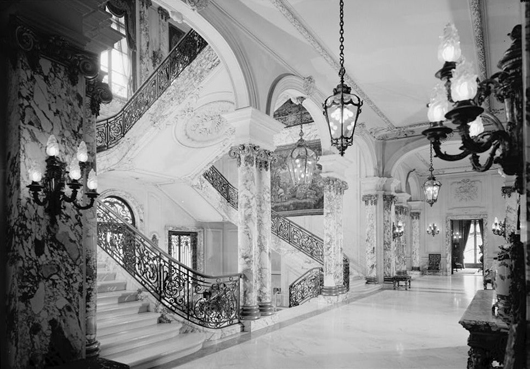