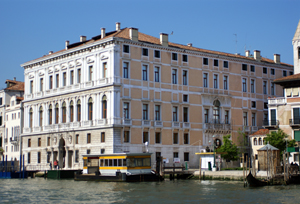 Palazzo Grassi in Venice. This file is licensed under the Creative Commons Attribution-Share Alike 3.0 Unported license.

VENICE, Italy (AFP) – Venetian canals transformed through a camera obscura, intimate snapshots of a prisoner’s life, and a hall of whispers are among the installations on show at a new exhibition, “Voices and images,” at Venice’s Palazzo Grassi.

Around 30 works by 27 international artists, borrowed from French billionaire Francois Pinault’s private collection, explore how the medium of video has been used to capture and challenge sensory expression and perception.

The hypnotic For Beginners videotape by contemporary American artist Bruce Nauman is among the highlights on show at the 18th century Palazzo Grassi museum, which the French collector bought and revamped in 2006.

The 70-year-old artist’s hands are captured on screen as they respond to verbal instructions on what positions his fingers must adopt. The video is just the latest in a series of his works which incorporate human body parts.

“As soon as we saw this work, we were hooked. The artist wanted to give it to a Californian museum. We fought to have it,” Pinault told French Culture Minister Aurelie Filippetti ahead of the exhibition’s opening on Thursday.

After months of wrangling, a deal was struck: the businessman was allowed to buy the work as long as a copy went to the Los Angeles County Museum of Art.

Alongside the talking hands, American artist Zoe Leonard captures the seductive beauty of the Serenissima’s waterways through a camera obscura.

A light streaming in from outside pierces a lens and flips the image of the grand canal outside the Palazzo Grassi onto its head, so that the waters cover the ceiling and boats pass upside-down as enchanted viewers loll on cushions.

The sense of peace contrasts sharply with Algerian-born artist Mohammed Bourouissa’s Temps mort installation, which collates images and sketches filmed by an inmate of a federal penitentiary in France on a mobile phone.

Bourouissa, who lives and works in Paris, asked the prisoner to film snapshots of inside – from chains to inmates gathered behind bars – to create a poor-quality video that evokes despair and violence in its banality.

In The Passion of Joan of Arc, Venezuelan artist Javier Tellez reworks the 1928 movie of the same name by getting mental health patients to rewrite the script to introduce the theme of madness and paranoid schizophrenia.

Tellez, who often works on questions of psychiatric illnesses, then has the patients become witnesses to the trials faced in mental health institutions.

In American artist Bill Viola’s 1995 project Hall of Whispers, the pallid faces of 10 people who have been gagged are displayed on a dark screen, with their eyes closed, while their protests and moans are clearly heard.

Exhibition’s curator Caroline Bourgeois said video has stopped being a stand-alone medium and has become integrated into other art forms.

While all of the works speak, they do not have a common message. Each visitor to the show takes away his or her own interpretation, she said.

“Video does not have a cinematic type of narration. It’s victory that it is no longer billeted in a category but has become sculptural in a certain fashion,” Bourgeois said.

“Voices of images” runs until Jan 13. 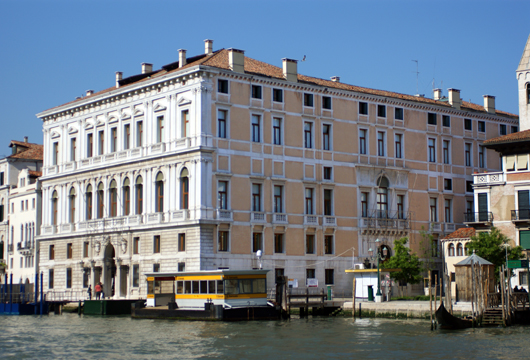 Palazzo Grassi in Venice. This file is licensed under the Creative Commons Attribution-Share Alike 3.0 Unported license.

Closing near for auction of Monument Rocks in Kans.