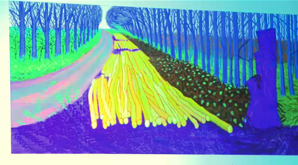 LONDON (AFP) – British artist David Hockney, one of the most influential painters of his generation, is to stage an exhibition of his landscapes from his native Yorkshire, including recent works produced on an iPad.

A total of 151 works will be shown, including giant paintings such as “Winter Timber” (2009), a woodland clearing painted in violet and blue on 15 canvases, films shot while driving through the forest, and drawings made using his iPad.

The exhibition, “David Hockney: a Bigger Picture”, will run at the Royal Academy of Arts in London from January 21 until April 9. Featuring some never-before-seen works, it focuses on the Bradford painter’s home county of Yorkshire in northern England.

The rural theme comes shining through, with many works depicting country tracks or produced at the side of a path.

Using an iPad has brought Hockney new freedom in his country forays.

The 74-year-old can “take it everywhere with him instead of carrying oil paint and brushes and watercolors and color pencils and ink,” one of the exhibition’s curators, Marco Livingstone, said at the press launch Wednesday.

“You could work instantly when inspiration took you. And he can instantly send it to his friends.”

The iPad art is created using the Brushes application, drawn with the finger or a special pen.

They “have their own quality,” Livingstone told AFP.

Hockney said getting out in the dales and moors of Yorkshire had changed his view on the seasons, particularly winter.

“I thought it was too cold and too dark,” he said during a rare press conference.

“And I realized how beautiful the winter was: it was not black and white, it was not gray, in fact sometimes a lot more colors than the summer.”

Dressed in a gray, double-breasted pinstripe suit and brown shoes, with a black and white hooped tie and polka-dot pocket square, the chain-smoker posed indoors for photographers with an unlit cigarette in his mouth.

He hopes the exhibition will make visitors “watch the spring a little more carefully.”

In 2005, Hockney returned to Yorkshire to live in the seaside town of Bridlington and three new groups of work made since then in his new surroundings are among the exhibition highlights.

The artist has a well-worn approach to finding scenes to paint.

“I drive on a little road, I have a chair in the back, I get it out, I sometimes go and sit places for quite a long time, just looking. I smoke a cigarette; contemplate,” he said.

Often credited as an important figure in international Pop Art — a label he refutes — Hockney is known for his landscapes, portraits and representations of private spaces, such as living rooms, showers and swimming pools.

Click below to view a video of David Hockney speaking at his press conference. Video copyright AFP: