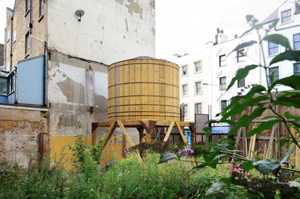 One of the tanks from Diane Dever and Jonathan Wright’s installation ‘Pent Houses,’ created for Folkestone Triennial 2014.

FOLKESTONE, England – Britain’s coolest, edgiest, most innovative public art project, the Folkstone Triennial, will open to the public on Saturday, August 30th and run through Sunday, November 2nd. Held every three years in Folkestone, on the southeastern coast of England, the event invites artists to use the town as their “canvas,” utilizing public spaces to create striking new works that reflect issues affecting both the town and the world beyond.

Some of today’s most imaginative artists are set to take part, including Jonathan Wright, whose long list of awards and distinctions includes a coveted residency at Verbier 3-D Sculpture Park in Switzerland.

At the Folkestone Triennial 2014, visitors will be able to see a series of five sculptures called the Pent Houses, which Wright created in collaboration with Irish-born artist Diane Dever.

Each of the five sculptures is different from the others, and all are based loosely on the water towers that used to be such a common sight above the streets of New York. The sculptures have been placed along the line of the hidden waterways of the Pent Stream, mapping its course under the streets of East Folkestone by placing waters towers above ground. These waterways were the foundation of Folkestone’s past prosperity, creating the harbor which attracted the initial human settlement, and providing not only fresh water to its inhabitants but also, in the post medieval period, a source of power for industrial mills. As a result of the search for building land near the city center, the streams were culverted in the nineteenth century, and today the water flows untapped, unused and unseen from the hills to the outflow at Folkestone Harbour.

In the current climate of increased awareness about the pressures on natural resources and the associated costs, flowing water is once again seen as a precious asset, and in many places canals and urban waterways are being opened up and revitalized as parks or cycle paths. The presence of water increases the value of real estate, wherever in the world: this is the sly allusion made in the punning title Pent Houses.

Pent House 1 is placed near the former public baths and the Silver Spring bottling company. It also carries a Plimsol Line marking – Plimsol is one of Folkestone’s more famous sons. Pent House 2 stands at the site of the bridge over the Pent at the highest tidal point of the stream, the top end of the former harbor. Pent House 5 stands over the outflow of the stream into the present day harbor, and has an audio component.

Dever works across many media and disciplines to explore ideas that lie at the intersections of public, private and liminal space. Her work seeks to provoke insight into how urban space is experienced, quantified, produced and understood. A native Londoner, Wright is fascinated by the fabric of modernity and the mysterious, seemingly functionless structures that surround us in modern society. His constructed works embody the mechanics of a modern society, which he encourages one to look at afresh. Both Dever and Wright live and work in Folkestone.

On Thursday evening, Aug. 28, Wright will be interviewed by BBC Television.

Click to view a video interview with Jonathan Wright and Diane Dever as they prepare their installation: 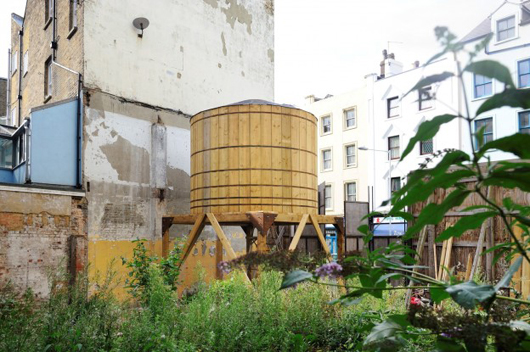 One of the tanks from Diane Dever and Jonathan Wright’s installation ‘Pent Houses,’ created for Folkestone Triennial 2014. 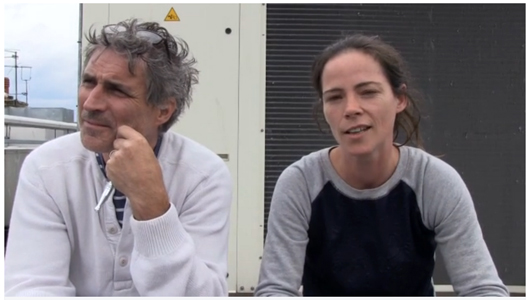