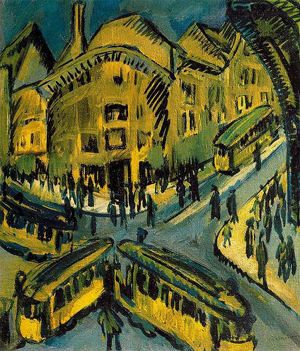 The gift-purchase of the Ludwig and Rosy Fischer Collection brings to the museum more than 200 pieces of art from the most creative years of German Expressionism.

Museum Director Alex Nyerges, who deemed it “almost indescribable,” says the collection is of “not just national but international importance.”

“It is a statement of an era, a statement that cannot really be duplicated. It’s a snapshot of time taking us back 100 years to look at one of the most important artistic movements of the 20th century. … This collection represents it so marvelously.”

Works by Ernst Ludwig Kirchner, Emil Nolde, Wassily Kandinsky and August Macke, among others, were collected from 1905 to 1925 by Ludwig and Rosy Fischer in Frankfurt, Germany.

Half of their collection escaped the Nazis when a son fled to the United States in 1934 before World War II.

Dr. Ernst Fischer moved to Richmond, bringing his art with him, and became chairman of the physiology department at the Medical College of Virginia.

His brother stayed in Germany about a year longer. Max Fischer’s half of the collection was “partly sold, partly confiscated and partly lost,” Nyerges said.

The plan took effect last year when Anne Fischer died at age 105, after a career in social work and community activism that earned lifetime achievement and humanitarian awards from the Jewish Welfare Campaign, Jewish Federation, Beth Sholom Home, the National Conference of Christians and Jews, and the YWCA.

The value of the art has increased significantly since the agreement was reached, to the point that “the most valuable painting in the collection is probably worth as much as we paid for the entire collection,” said John B. Ravenal, the museum’s Sydney and Frances Lewis Family Curator of Modern and Contemporary Art. The amount paid was not disclosed.

“The depth, breadth and quality of the Fischer collection is among the most important in the museum’s history, along with the Mellon, Lewis, McGlothlin and Gans collections,” Nyerges said.

No state funds were used for the purchase of the art, but upon purchase it becomes property of the state.

In November 2006, a Kirchner painting of a street scene sold at auction for more than $38 million. The art market, along with the rest of the economy, since has cooled, but a smaller Kirchner street scene sold in London in March for about $8.9 million.

The collection includes 21 Kirchners, five of which are oil paintings on canvas. The other Kirchners include woodcuts, a pastel on paper, and a lithograph.

“We have a few works from this period of German Expressionism,” Ravenal said. “This in one fell swoop will completely transform our holdings in this area from minor holdings to among the top in the United States.”

Kirchner was the leader of an Expressionist group that called itself Die BrOcke, or The Bridge.

“They saw themselves as a bridge, away from tradition toward the future,” Ravenal said.

“It’s not just a minor local movement. It is a very important counterbalance to what was going on in Paris with Fauvism and Cubism. It starts out as a fierce rejection of tradition and the establishment, and a desire to reunite with nature, and then during World War I, it takes on a different tone of urban anxiety and alienation.”

The attention-getter, Ravenal said: “I think it’s the bright colors, the strong emotion and the bold vision.”

Nyerges sees German Expressionism as a precursor to modern art.

“It really does become an inspiration for other kinds of expressionism, which becomes the root for so many of the other artistic movements of the 20th century and now,” he said.

A few pieces of the collection will be showcased when the VMFA reopens May 1 in its newly expanded building at the corner of the Boulevard and Grove Avenue. The last part of the building project will be the renovation of the 1970 wing, which will reopen in January 2011 with the Fischer collection prominently displayed.