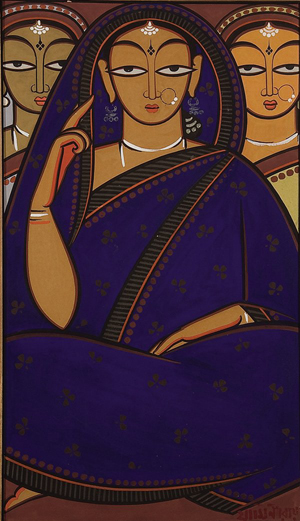 Renowned Indian artist Jamini Roy (1887-1972) painted this gouache on card, which is signed in Bengali lower right. The work, 26 1/2 inches x 15 1/2 inches, was acquired in India by an American collector. It sold at auction in 2010 for $17,000 plus the buyer’s premium. Image courtesy of LiveAuctioneers.com Archive and Jackson’s International Auctioneers & Appraisers.

NEW DELHI (AFP) – It’s late in the evening and the Indian capital’s moneyed art crowd is spilling out of congested galleries into a narrow maze of streets, sipping glasses of wine as they peer at catalogs.

Lado Sarai, a warren of bylanes and haphazardly constructed buildings in New Delhi’s hinterland, has become a thriving new art district where Mercedes and BMWs jostle with bullock carts for space to pass.

“With this uncertain economic climate, I’m only making investments in ‘real’ assets like gold, real estate—and art,” said banking executive Suresh Basu, 34, as he flipped through a catalog with a female companion.

Just as China’s economic boom helped develop an important domestic art scene, fast-expanding India has been experiencing its own vogue for art buying among the upwardly mobile middle class.

Lado Sarai, one of many villages that the mushrooming capital has engulfed, sprang up as an art district when gallery owners were looking for a space to open their galleries.

The attraction of Lado Sarai is its status as an autonomous village, which means it is not subject to the restrictive planning policies of the municipal authorities.

And rents are far lower than in central Delhi.

The bustling area was pioneered as an art district by businesswoman Mamta Singhania who needed a new space after municipal planners said she could no longer operate her gallery in a residential neighborhood.

Singhania came across Lado Sarai—close by the posh enclaves of south Delhi—and gave the nondescript neighborhood, crowded with small retail outlets selling food, clothing and other items, its first gallery in 2009.

“I couldn’t find any place in my budget so I started up here and other galleries followed—there are a lot of people now,” Singhania told AFP. “The neighborhood has become a vibrant, humming place.”

Some owners schedule their show openings on the same night so the art crowd can go from one gallery to another.

“It’s a good place to exhibit,” said Bose Krishnamachari, an artist from the southern state of Kerala, whose contemporary works were on display at a sleek, well-lit gallery called Latitude.

India’s art market is still in its infancy, with sales accounting for an estimated 1 percent of the global art market, which is valued at around $40 billion, but experts expect it to grow sharply.

Most buyers are from the growing middle class or the wealthy Indian diaspora.

“We’re still at the tip of the iceberg in India with the number of artwork owners,” said art fair organiser Kirpal. “But the Indian art market can look forward to a long growth period.”

The galleries in Lado Sarai cater for a wide range of clients, with works on offer ranging from a modest $100 or $200 to hundreds of thousands of dollars.

“There’s still a lot of learning to be done among buyers about Indian artists. Sometimes buyers just come and ask me which artists they should buy,” said Lado Sarai Must Art Gallery owner Tulika Kedia.

“But many are still only comfortable with known artists so it’s harder to sell the works of artists who aren’t big names.”

For many years, conventional wisdom had it that Indian collectors only bought Indian art, but overseas dealers believe India’s growing economy is minting a sizeable pool of wealthy buyers interested in international art.

“The Western galleries now are looking at India as an important market for selling their art,” said Latitude Gallery’s Kakar.

“Sooner or later, all the big international galleries will set up shop in India because this is where the money is,” she says. 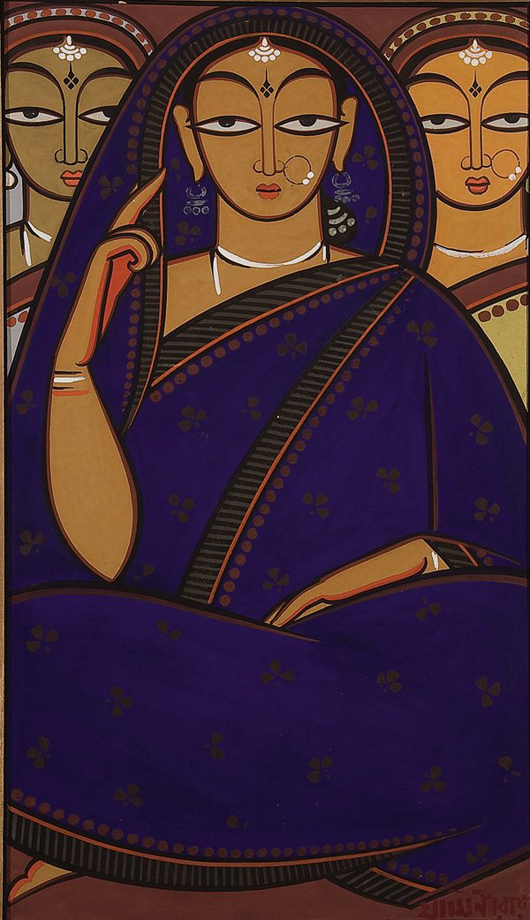 Renowned Indian artist Jamini Roy (1887-1972) painted this gouache on card, which is signed in Bengali lower right. The work, 26 1/2 inches x 15 1/2 inches, was acquired in India by an American collector. It sold at auction in 2010 for $17,000 plus the buyer’s premium. Image courtesy of LiveAuctioneers.com Archive and Jackson’s International Auctioneers & Appraisers.