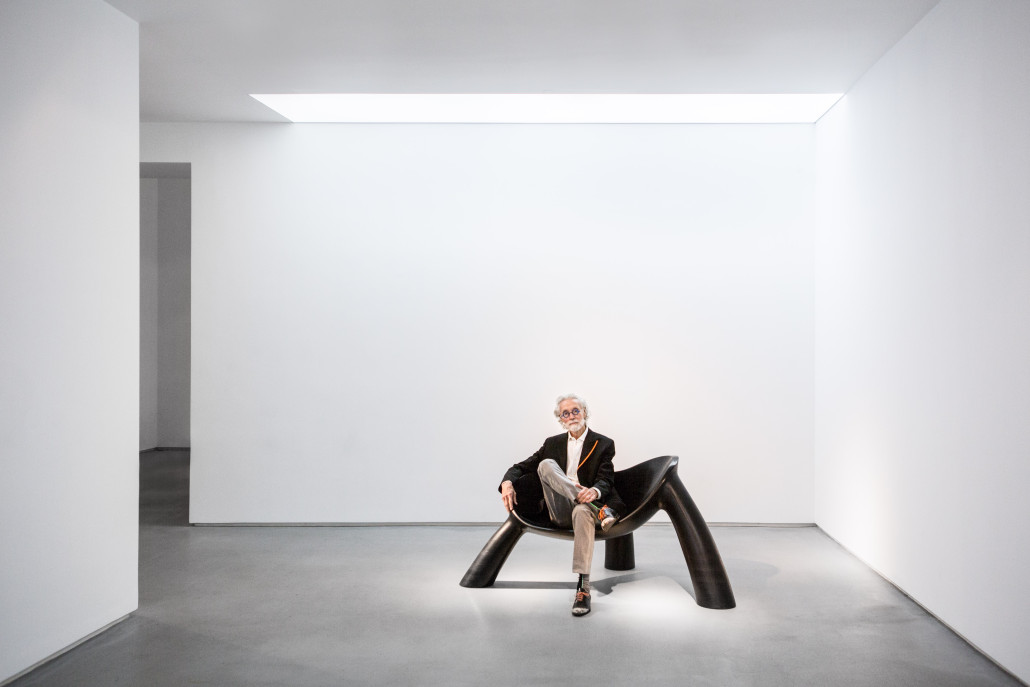 Portrait of Wendell Castle seated on ‘Long Night,’ 2011. Photo courtesy of Friedman Benda and the artist. Photo by Adrien Millot.

NEW YORK (AP) – Sometimes a chair is not just a chair, but a softly organic, cantilevered form, perhaps sprouting a leaf to one side. A table can resemble a voluptuous jungle plant brought from an alien planet. A bench becomes an inviting squid resting on delicately rounded tentacle legs.

Wendell Castle, 83, sometimes dubbed the father – or grandfather – of the American art furniture movement, has, throughout his 57-year career, employed creative new techniques in works that are both sculpture and furniture.

Now, in “Wendell Castle Remastered,” the Museum of Arts and Design explores Castle’s most recent, digitally crafted pieces. The show will remain on view through Feb. 28.

In what sometimes resembles a forest out of a Dr. Seuss book, Castle’s latest works are displayed side-by-side with his earliest ones, which inspired them.

“Even though my work has an element that is a seat or a desk, it also has other elements that have nothing to do with any function. But it’s a set. They go together,” the artist is quoted as saying in the exhibit catalog.

Says Ronald T. Labaco, who curated the show: “He loves the idea of planting a furniture seed that sprouts into a chair or lamp or table.”

Earlier works featured include some of Castle’s pieces from the 1950s and ’60s, when he was an innovator in the process of stack lamination: He built forms from carefully sized and stacked wood, and then honed them by hand to create eye-popping organic pieces.

Some of the earliest works in the exhibit include spindly sculptural pieces made from gunstocks, including Scribe’s Stool, which helped launch Castle’s career. It was first exhibited at this museum, then called the Museum of Contemporary Crafts, and so has come full circle. After seeing the chair in 1962, the dean of fine and applied arts at the Rochester Institute of Technology invited Castle to be a professor of furniture design, a position that allowed him access to the facilities he needed to grow and experiment as an artist. Castle still lives and works in the Rochester, New York, area.

His sculptural approach to furniture has evolved in recent years, when Castle has combined his handcraftsmanship with the latest in robotics, including an enormous milling robot named Mr. Chips.

In his latest works, carving, rasping and finishing techniques are combined with digital techniques like 3-D scanning, 3-D modeling and computer-controlled milling.

“It is nothing short of astonishing that he is now making some of the best work of his long career, work that attests to the value of deep expertise and experience,” says Glenn Adamson, a director of the museum. 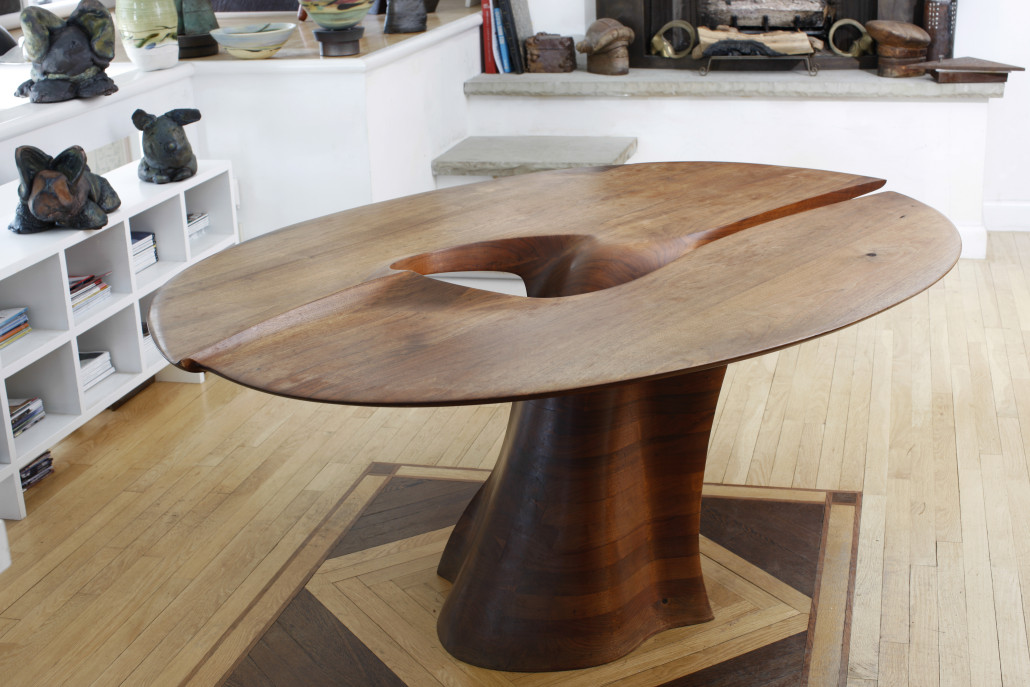 Many of the more recent pieces feature cone-shaped forms, stacked or layered, with results that Castle says are too complex to have been realized using his earlier method of stacked lamination.

The enormous 2015 lamp High Hopes, for example, resembles a Seussian tree or giant mushroom. It is almost 9 feet tall, and the tentacle-leaves at its base have been hollowed out to house programmable, multicolor lighting elements. The lamp is typical of many of Castle’s latest works in its voluminous size, achieved with robotic assistance, combined with expert hand finishing.

In addition to the art furniture pieces displayed across two floors of the museum, two bronze, bench-like sculptures – Wandering Mountain and Temptation, both made in 2014 – have been installed outside the museum in Columbus Circle, for the public to sit on, lean on and enjoy.

The exhibit also includes two video clips, excerpts of footage taken for an upcoming film by Alison Castle, the artist’s daughter. One is a portrait of the artist, including footage from the ’60s. The other is about Castle’s process.

“If you think about it, his early laminated works were really a kind of proto 3-D printing,” Labaco explains. “And his recent works, using digital technology, also feature a lot of hand finishing. You can really see that handcraftsmanship and technology go hand in hand. That’s one of the important points this show is trying to make.”

In the catalog, Castle says, “I can’t see any reasons that, if a tool was available, why not use it?” While he says he is intrigued by 3-D printing, “bronze and wood are the two best materials to make furniture out of.”