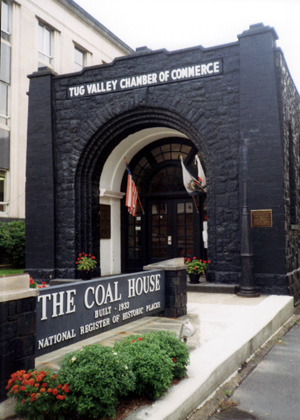 Located adjacent to the Mingo County Courthouse, the Coal House was home to the Tug Valley Chamber of Commerce. This work is licensed under the Creative Commons Attribution-ShareAlike 3.0 License.

WILLIAMSON, W.Va. (AP) – A Mingo County landmark, a structure built of coal nearly 80 years ago, is about to get an extreme makeover.

The coal walls and the original arched windows will remain.

But nearly everything else was destroyed or damaged in a fire on Columbus Day last fall.

“It is the Coal House. It is the city of Williamson’s landmark,” said Leigh Ann Ray, project manager for the Mingo County Commission.

“The sky is not the limit, but the county commission is willing to do what they have to do to put it back and put it back properly.

“It’s really not that massive of a project.”

Ray said visitors still stop to take photos of the Coal House, even with its front entrance boarded up.

Contractors could submit bids for the project until Wednesday.

Ray said she anticipates commissioners will award the bid at a March 25 special session. The county expects repairs to cost about $200,000, with construction starting in early April.

She said the county hopes to wrap up construction by June 16 in time for the Hatfield-McCoy Reunion Marathon.

“We would like to have the Coal House open and ready to welcome the public,” she said.

Ray said some have made “uneducated guesses” about the fire, blaming faulty electrical wiring, but fire marshals did not pinpoint the true cause. Investigators determined only that the blaze started in the ceiling. No foul play is suspected.

The fire gutted the structure. The building needs new drywall, flooring, lighting and electrical work. Wood framing is now visible, as are the coal bricks inside the walls. The ceiling also is gone, providing a clear view of the antiquated wiring, roof studs and the underside of the roof. The fire also torched brand-new hardwood flooring that had been donated by the nearby Mohawk Flooring plant. Workers had not installed the flooring, but the supplies were inside the Coal House, adjusting to the building’s humidity and temperature.

The exterior largely escaped damage in the blaze, aside from black smoke debris that now darkens part of the building’s entranceway.

“The fire, structurally, didn’t do much damage,” Ray said.

It did, however, uncover some structural problems. Water had leaked through the aged roof and into the walls over the years, causing some of the framing to rot, Ray said. Now there’s a temporary roof on the building to keep water out.

“The fire allowed us to go in there and see what needs to be done,” she said.

Ray said the Coal House is basically “just a great big room.” It’s 50 feet long and 21 feet across, with a small bathroom on one side of the main entrance and a coat closet on the other side.

It was constructed in 1933 under the supervision of H.T. Hicks, a Welch architect, and D.M. Goode, a Williamson businessman.

The 65 tons of coal used in the construction were mined from the nearby Winifrede seam and donated by five local coal companies.

Crews remodeled the building several times over the years. The main room was partitioned into three smaller rooms in the late 1970s, creating a waiting room and two offices. The high ceiling also was lowered around the same time.

Ray said the county wants to return the Coal House to its original look with hardwood flooring, plaster on the walls instead of wood paneling and period-appropriate light fixtures.

The interior again will be one large room, but with cubicle-style partitions to separate workspaces. Ray said the building’s back wall might be used to display the work of local artists.

The coal inside the walls will receive a special foam covering to prevent oxidation, which can compromise the strength of the bricks. The foam will be the same kind used to make coal mine seals.

The coal on the building’s exterior is protected by the paint and varnish that also keeps it black and shiny, Ray said.

He said the county must abide by State Historic Preservation Office guidelines during construction. That means the Coal House’s windows can’t be replaced with modern windows but must be repaired. The windows’ top arches, which were blacked out with paint at some point in the building’s history, must be cleaned so light can shine through.

She said the preservation office would have liked the county to repair the original roof, but that’s not an option because of the severe damage it sustained in the blaze. 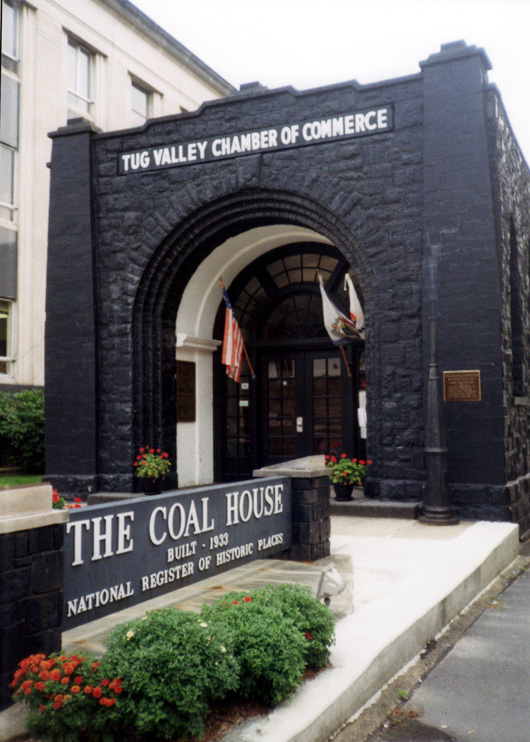 Located adjacent to the Mingo County Courthouse, the Coal House was home to the Tug Valley Chamber of Commerce. This work is licensed under the Creative Commons Attribution-ShareAlike 3.0 License.