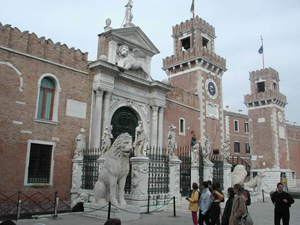 The Porta Magna at the Venetian Arsenale, site of the Biennale. Image by Paolo da Reggio. This file is licensed under the Creative Commons Attribution-Share Alike 3.0 Unported license.

VENICE, Italy (AFP) – Architects from around the world have converged on Venice for the Biennale show, which opens on Wednesday, showcasing designs aimed at bringing urban designs more in touch with the general public.

The renovation of working-class areas, designs for times of economic crisis and the reconstruction of cities following natural disasters like earthquakes and tsunamis have taken center stage at the world’s largest architecture fair.

The designs housed in the spectacular Arsenale – an old naval shipyard and military base – and the nearby Giardini park on the lagoon include some by leading architects including Norman Foster, Zaha Hadid and Renzo Piano.

“The crux is to mend the fracture between architecture and civil society,” Biennale president Paolo Baratta said.

This year’s theme is “Common Ground” – intended as interaction between architects and the population as well as between designers themselves.

The exhibition has been designed by British architect David Chipperfield – most famous for his work on Museum Island in Berlin – and spreads out over 107,600 square feet with a total of 119 participants.

Among the most eye-catching projects is the installation by Japan’s Kazuyo Sejima for the reconstruction of Mijato-jima island, which was destroyed by the tsunami last year – a theme which is echoed by the Japanese pavilion.

Chile decked out its pavilion to look like the inside of a salt mine, importing 11 tons of salt from the Tarapaca mine especially for the show.

Russia went hi-tech with its pavilion, where visitors are handed an iPad to view an exhibition accessible only through barcodes that can be scanned.

Italy chose to celebrate its history of innovation with a show that goes back to the work of technology pioneer Adriano Olivetti in the postwar period.

The Greek pavilion meanwhile invites visitors to reflect on the transformation of public buildings and spaces during the economic crisis.

One of the novelties this year is the Mexican pavilion outside the 16th century deconsecrated church of San Lorenzo, which has been granted to Mexico as its cultural hub for the next nine years on condition that it pays for repairs.

The fair, which runs until Nov. 25, hosts a total of 55 countries taking part including several newcomers like Angola, Kosovo, Kuwait and Peru.

Among other renowned architects showcasing their designs are Jean Nouvel from France, Peter Eisenman from the United States and Ai Weiwei from China.

For weary visitors, the architecture collective Urban Think Tank has set up a replica of a typical Venezuela roadside shack with neon signs, pumping salsa music and unfinished walls that serves up genuine Latin American fare.

The curator of the official Venezuelan pavilion said she did not approve.

“It is an interesting idea but it distorts reality because it is a reductive vision,” Adreina Agusti told AFP, as she showed off an exhibition of social housing projects planned by the government of President Hugo Chavez.

The Urban Think Tank is also behind an exhibit on the theme of a “vertical favela” examining the squatting of the Torre de David in Caracas after it was abandoned by a bank, showing a community full of life and creativity.

Festival organizers on Wednesday also awarded a lifetime achievement award to Alvaro Siza Vieira, famous for works such as the Boa Nova Tea House and the Serralves Museum of Contemporary Art in his home town of Oporto in Portugal.

“Siza has upheld a consistent production of works at the highest level, yet without the slightest hint of the overt professionalism and promotion that has become part of the contemporary architect’s machinery,” Chipperfield said.

Chipperfield said he had encouraged his colleagues to collaborate on designs so as to show that architecture was not just about unique eye-catching projects but more about “something created in collaboration with every citizen.”

The British designer also paid homage to the host city saying: “The city shames us by its beauty, reminding us of the real possibilities of architecture, both as individual acts and as part of a greater vision.” 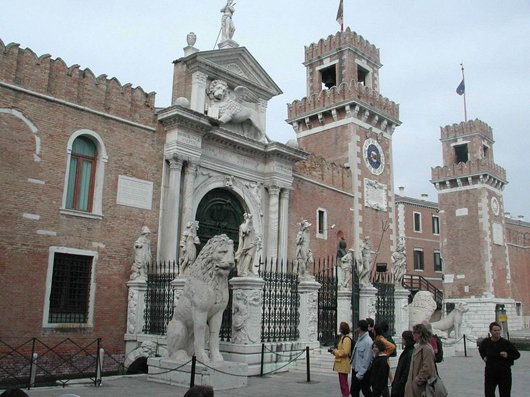 The Porta Magna at the Venetian Arsenale, site of the Biennale. Image by Paolo da Reggio. This file is licensed under the Creative Commons Attribution-Share Alike 3.0 Unported license.