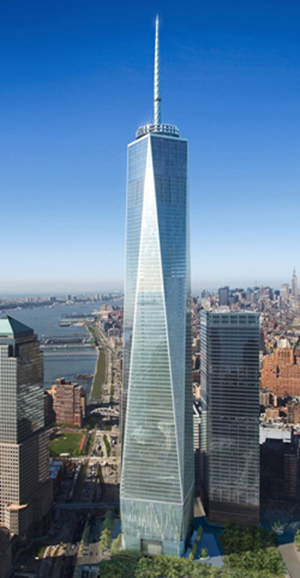 Workers gently maneuvered a steel column into its base atop the skyscraper’s skeletal current top, bringing the total height just beyond the 1,250 feet (381 meters) of the Empire State Building’s observation deck.

Coming on the eve of the anniversary of the killing by US forces of Osama bin Laden, mastermind of the al-Qaeda attack that demolished the former World Trade Center, the moment was marked by a celebration of technical prowess and flag-waving patriotism.

Scott Rechler, vice chairman at the Port Authority, which owns the site, told a press conference that the “the most complex construction project in our history” had been “an act of passion and an act of patriotic duty.”

One World Trade Center, already a gleaming, angular landmark on the city’s skyline, will get still taller as construction winds up late next year, finally reaching 1,776 feet (541.3 meters) and 104 floors.

Not only will that dwarf the 1930s masterpiece of the Empire State Building, but it will be higher than the old Twin Towers, which both collapsed during the September 11, 2001 terrorist attacks, in which almost 3,000 people died.

Port Authority executive director Patrick Foye joked the building was so tall that “if you really crane your neck, you can see Alaska” and that, once completed, “Asia may come into view.”

Although the mammoth construction work to resurrect the Ground Zero area is at last nearing fruition, the project has been plagued by billions of dollars in cost overruns, as well as delays, bickering over designs, and worries over whether the office space will be profitable.

Just over half of the units have been rented, including a major deal with publishing giant Conde Nast.

“The New York City skyline is, once again, stretching to new heights,” Bloomberg said. “The latest progress at the World Trade Center is a testament to New Yorkers’ strength and resolve — and to our belief in a city that is always reaching upward.”

“Today our city has a new tallest building and a new sense of how bright our future is,” Bloomberg said.

Some experts quibble over which New York tower is on top, since the new listing giving One World Trade Center that honor discounts the Empire State Building’s needle-like antenna. When the WTC reaches its full official height, the figure of 1,776 feet will include a broadcasting antenna.

But there’s no contest about which building is the tallest in the world. That’s the Burj Khalifa in Dubai, measuring 2,717 feet (828.1 meters).

The old Twin Towers will always haunt the shiny replacement. Deep pools commemorating the dead have been built at the exact locations of each tower’s old footprint.

The fine art of the Barnes Foundation move
Scroll to top