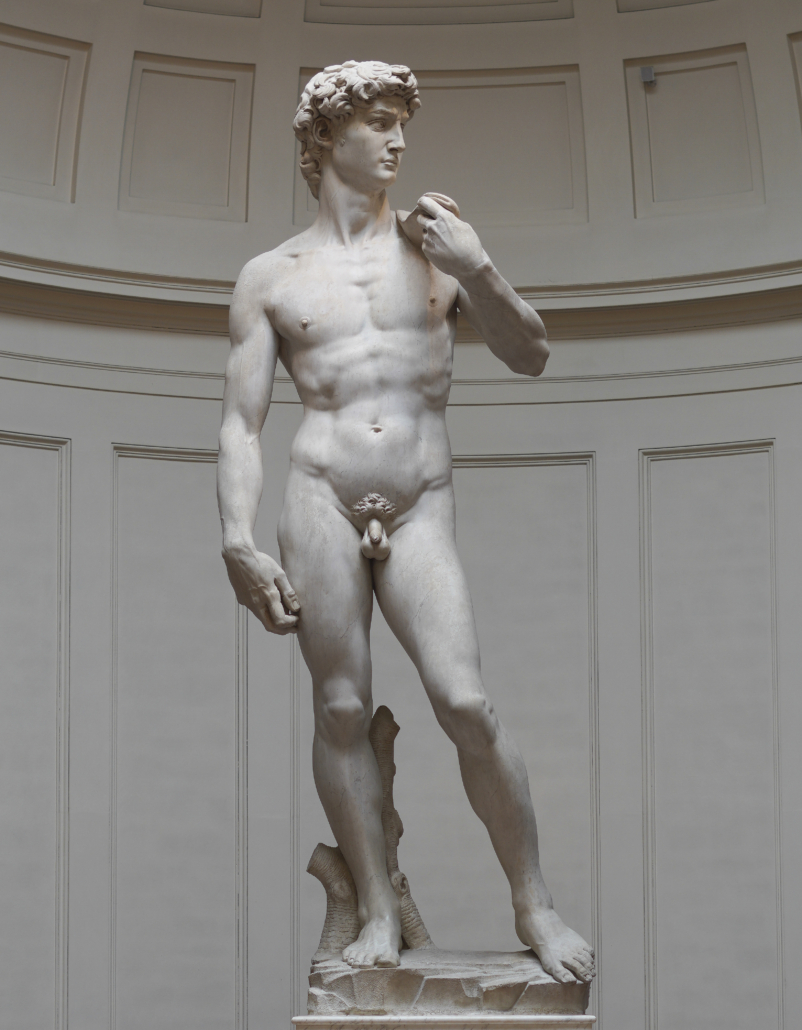 Michelangelo’s David, shown in its longtime home at the Galleria dell’Accademia in Florence. A 3D replica of the legendary sculpture, installed at the Italy pavilion at Expo 2020 in Dubai, is proving controversial for the exclusionary way in which it is displayed. Image courtesy of Wikimedia Commons, credited to Commonists and licensed under the Creative Commons Attribution-Share Alike 4.0 International license.

DUBAI, United Arab Emirates (AP) – One of the most talked about attractions at the world’s fair under way in Dubai is a towering statue made of marble dust that’s raising eyebrows just as the original did more than 500 years ago.

At Italy’s pavilion, a 3D replica of Michelangelo’s David stands tall, his gaze intense and defiant. For most visitors, though, David’s head is all they will see as they tour the pavilion. Only VIPs with special access will be able to catch a view of the statue from head to toe while it’s on display for the next six months at Dubai’s Expo 2020.

The original David is nude and some visitors see the limited view offered as a form of censorship. Others say the way David is displayed at the Expo is a form of artistic expression.

“It is no coincidence that David is not seen from the bottom to the top, as it normally is, but it welcomes people by looking at them in the face,” said David Rampello, the director of art at the Italian pavilion.

An art historian in Rome said choosing who can view the statue in full and who cannot creates a hierarchy.

“What the rich, the great and the good can see and what the ordinary folk can see shouldn’t be two different things,” said Professor Paul Gwynne, who teaches medieval and renaissance studies at the American University of Rome.

It took a team of Italian experts 40 hours of digital scanning to create the replica, made with what organizers describe as one of the world’s largest 3D printers. Artists used filaments from recycled plastic material, then a mix of resins and marble dust to create it.

At its home in Florence’s Galleria dell’Accademia since 1873, the original David draws gasps from onlookers to this day. Michelangelo’s mastery and his passion for human anatomy, from the contracted muscles of David’s abdomen to the flexing of his right thigh muscles, make the piece unforgettable for those looking up at the towering work of art.

In Dubai, those details get lost. David stands in the center of a narrow octagonal shaft, presented from his chest up and surrounded by replicas of Roman columns. Visitors in the public area can see parts of David’s torso if they lean over a railing.

The rest of his body sits inside a clear partition on the separate floor. His genitals and buttocks find themselves between the floors, though fully visible if an onlooker stands near the partition and peers up.

That position drew the ire of a La Repubblica reporter writing on Expo’s opening.

“Why can’t you see the whole body of the biblical hero, because you only see the head, the magnetic eyes staring at you silently? And where is the rest?” an article in the daily newspaper read, at one point referring to David’s “beheading.”

David’s nudity has been part of a centuries-old debate about art pushing boundaries and the rules of censorship. In the 1500s, metal fig leaves covered the genitals of statues like David when the Roman Catholic Church deemed nudity as immodest and obscene.

Nudity even bumps up against mores in the modern era. Controversy erupted in 2016 when officials erected wooden panels to shield nude statues at Rome’s Capitoline Museums during a visit by Iran’s then-President Hassan Rouhani. That spurred some politicians to accuse the government of caving in to “cultural submission” though Rouhani himself thanked Italians as being “very hospitable people” when asked about the gesture.

In the wider United Arab Emirates, a few nude artworks can be seen at the Louvre Abu Dhabi, though the museum largely caters to more conservative pieces.

Expo visitor Calli Schmitz from Germany she said she didn’t think the way the replica was displayed at the Expo did it much justice.

“I think it was not as exposed as it should have been,” she said. “I think because of the gold everywhere, people did not really realize it was the statue of David.”

“It’s a different way of approaching the same sculpture and putting it in another perspective,” he said.

Dinara Aksyanova, a 31-year-old visitor from Moscow, however, wasn’t as forgiving.

“Why was it only half? It makes no sense,” she said. “The most interesting part is underneath.”