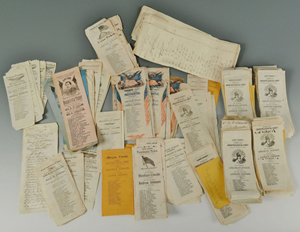 Approximately 260 ballots from the 1864 presidential election were sold as a single lot. Image courtesy Case Antiques.

KNOXVILLE, Tenn. (AP) – Two collectors in Knoxville are trying to figure out what do with their latest acquisition: about 260 ballots from the 1864 Presidential election, most of which were cast for Abraham Lincoln. Case Antiques of Knoxville conducted the Auction on Jan. LiveAuctioneers.com provided Internet bidding.

Cole Piper of Knoxville said he and collecting partner Andy Simon of Maryville, Tenn., would probably sort through the items to find the ones they want to keep and may offer the rest to others.

Piper told the Knoxville News Sentinel that he and Simon bid $8,000 to purchase the collection of ballots, which were auctioned in Maryville last month. He said finding more than one ballot from the election is rare.

“No. 1, you don’t ever see multiple Lincoln ballots,” said Piper when explaining his excitement. “One will come up for sale and someone will have it, but to see that 270 of them came up for sale was pretty amazing.”

The items started with a $2,500 bid, but quickly rose past their estimated valued of $6,000. Piper and Simon said after the auction they weren’t sure what they would do with all the ballots.

“Obviously he and I don’t need 270 of them,” said Piper. “We’re going to go through and the ones we want we will put in our collection, and probably we’ll offer them (the other ones) to other people.”

Although Piper has been a member of the American Political Items Collectors since 1971, most of his collection has consisted of buttons, posters and banners until now. He listed Lincoln among his three favorite presidents, along with Theodore Roosevelt and George Washington. 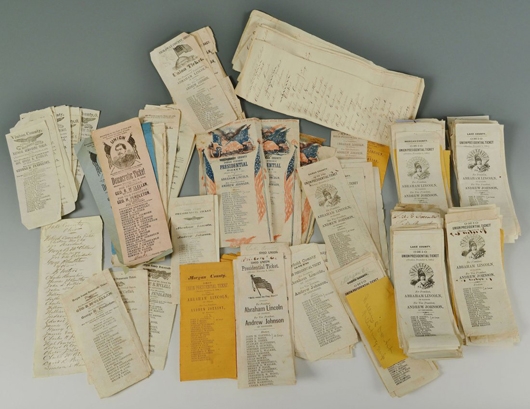 Approximately 260 ballots from the 1864 presidential election were sold as a single lot. Image courtesy Case Antiques.