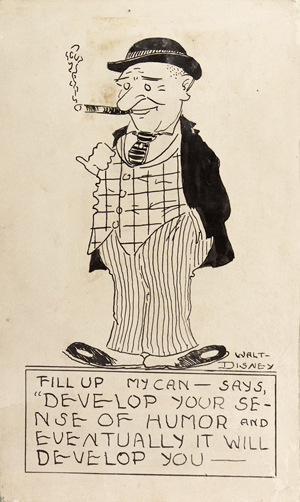 The drawing titled ‘Fill Up My Can’ is signed by Walt Disney. The 8- by 4 3/4 pen and ink drawing is in excellent condition. Image courtesy of Holabird-Kagin Americana.

RENO, Nevada (AP) – An original, autographed drawing by Walt Disney, believed to have been made about 1920 before he hit it big in the entertainment world, will go up for auction in Reno this week.

The whimsical drawing of a cigar-chomping man wearing a derby hat will be among 1,400 items up for sale at the two-day auction set to begin Tuesday at the Atlantis Casino Resort. Internet live bidding will be available through LiveAuctioneers.com.

“Real pieces signed by him (Disney) are really rare,” said Fred Holabird of Reno-based Holabird-Kagin Americana, which is staging the auction. “This is one of the earliest known signed Disney pieces, if not the earliest.”

The drawing was once owned by Disney’s sister, Ruth Disney.

Also up for auction is what’s billed as the “first and possibly only known copy” in private hands of the original Nevada Black Book, which features names, information and photos of about a dozen people barred from entering Nevada casinos.

The book was made by the Nevada Gaming Commission about 1960, and was owned by the state’s first gambling officer.

“It represents the first effort to keep illegal people out of Nevada casinos. It’s a big step in the way we did business in Nevada,” Holabird said, adding the book is expected to fetch up to $5,000.

“It’s the best piece in the auction,” Holabird said. “It’s one of the first $50 gold coins Augustus Humbert struck when he was appointed U.S. assayer in San Francisco in 1851.”

Also up for auction are collections of Old West photos and Mustang Ranch brothel memorabilia.

View the fully illustrated catalog for this auction at www.LiveAuctioneers.com. 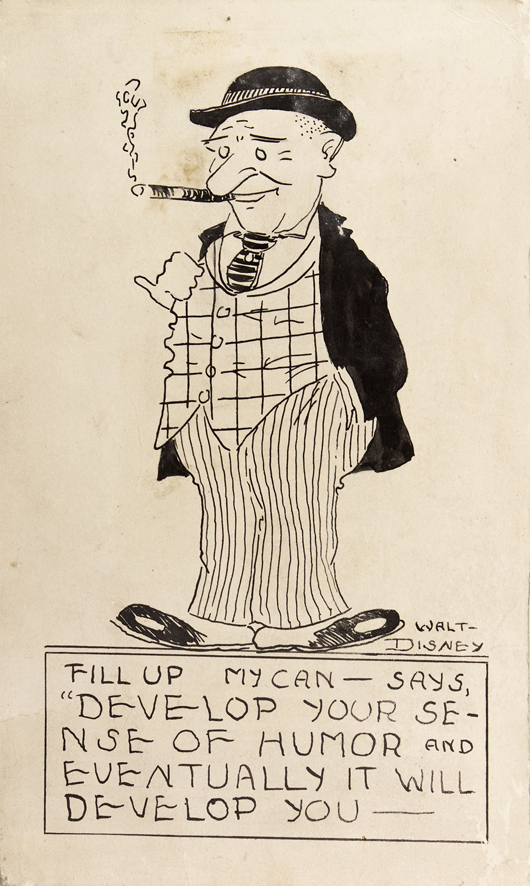 The drawing titled ‘Fill Up My Can’ is signed by Walt Disney. The 8- by 4 3/4 pen and ink drawing is in excellent condition. Image courtesy of Holabird-Kagin Americana.

Relics of Nevada’s notorious side sold at auction

Reading the Streets: Faile’s mural at Bowery and Houston St.