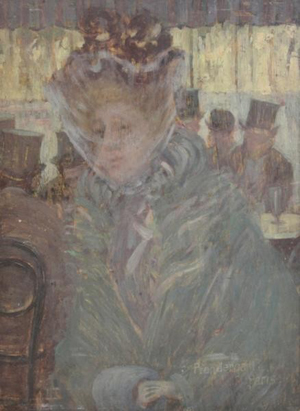 LARCHMONT, N.Y. – A small painting pulled from a box of artwork dropped off at Clarke Auction Gallery last month became a once-in-a-lifetime find for the consignor when it sold on Oct. 23 for $165,910, inclusive of the buyer’s premium. Under a layer of dust, the unframed oil on panel painting of a woman seated in a café was signed “Prendergast, Paris.”

Ronan Clarke, owner of Clarke Auction Gallery, and appraiser/auctioneer Nelia Moore, recognized the quality of the work and the name as being that of American painter Maurice B. Prendergast (1858-1924), who studied art in Paris in the early 1890s.

“It was more typical of his early work done in Paris. He brightened up his paintings a lot after he came back to America,” said Clarke, adding that determining the $40,000-$60,000 estimate was difficult.

“Many collectors like his brighter paintings,” said Clarke. “This painting – of an elderly woman with a veiled face – is more important historically.”

Clarke took the painting to Nancy Mowll Mathews, the Prendergast catalogue raisonné expert at Williams College Museum of Art in Massachusetts, who authenticated it as one of the artist’s early works.

“It’s in as-is condition, of course. It hadn’t been touched in a hundred years,” said Clarke.

Opening at $20,000, the painting quickly passed six figures and ultimately hammered for $140,000 to a bidder in the gallery.

“I was pleasantly surprised – very pleased,” said Clarke. “We’ve been on a roll lately. We’ve sold a painting for a million dollars and sold paintings for a quarter of a million. It’s been a good year.”

The lucky consignor was also happy with the result, said Clarke.

“He’s a regular consignor – a hard worker who does a lot of cleanouts. Never a nuisance.”

And with a find like that, he never will be.

The fully illustrated catalog with prices realized from Clarke Auction Gallery’s auction of Oct. 23 is available at www.liveauctioneers.com .