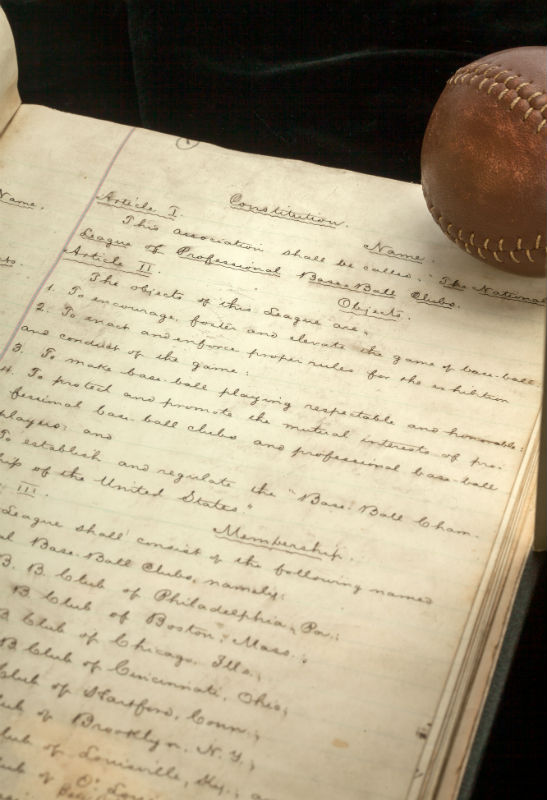 LAGUNA NIGUEL, Calif. – In the wake of its record-breaking $3.26 million sale last spring of the 1857 Laws of Base Ball documents, SCP Auctions has unveiled the recently discovered 1876 Founding Documents and Original Constitution of Major League Baseball, a hand-written, 74-page sports artifact, which will go up for auction May 24. Bidding will close June 10.

“This, the founding document of Major League Baseball, is a central piece of Americana, inaugurating an institution that would come to be a defining aspect of American culture,” says Dan Imler, vice president of SCP Auctions.

Baseball first became an occupational endeavor in 1869, when the Cincinnati Red Stockings became the first team to pay its players a salary. The dawn of professional baseball, however, was plagued by a lack of governance that seeded corruption and instability. Teams folded regularly due to the unregulated and often crooked practices of players and owners alike. By the end of the 1875 season, the future of professional baseball was in peril. In 1876, its saviors emerged and Major League Baseball was born.

In a meeting held on Feb. 2, 1876, at the Grand Central Hotel in New York City, Chicago White Stockings owner William Hulbert persuaded a carefully assembled group of baseball luminaries to join his effort to bring order, dignity and profitability to the fledgling sport. Supported by fellow visionaries such as Albert Spalding, Harry Wright, Nicholas Young, Morgan Bulkeley and others, Hulbert set forth his blueprint for the destiny of professional baseball.

SCP Auctions is offering those very pages, the central handwritten documents crafted by Hulbert and his supporters in 1875-76 that established what endures today as America’s oldest professional sports league.

The documents have never been offered publicly. The sports world has known very few transcendent foundational documents that have surfaced in original form for public offering. In addition to the  1857 Laws of Base Ball sold by SCP Auctions ($3.26 million), there are James Naismith’s 1891 Original Rules of Basketball (sold for $4.3 million) and the 1859 Original Rules of Soccer (sold for $1.4 million).

“We’ve sold some incredible baseball artifacts before – from Babe Ruth’s 1920 Yankees jersey for $4.4 million to Kirk Gibson’s 1988 World Series home run bat for $575,000 – but this artifact trumps them all. Without these documents, such objects would not exist,” said Imler.

For more information on how to participate and take part in the bidding, call 949-831-3700 or visit www.scpauctions.com.