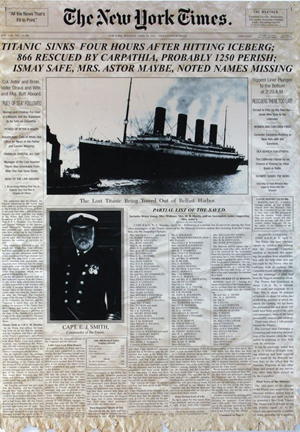 The April 16, 1912, issue of ‘New York Times’ pictured the Titanic and her captain on the front page. Image courtesy of LiveAucitoneers.com Archive and Guernsey’s.

WASHINGTON (AFP) – More than 5,000 artifacts salvaged from the Titanic are to be sold in one lot at auction in New York, 100 years to the day after the luxury liner sank in the Atlantic with some 1,500 people on board.

In a filing with the Security and Exchange Commission, Premier Exhibitions, which owns sole salvage rights to the Titanic through its RMS Titanic unit, said it has engaged New York auctioneers Guernsey’s to handle the sale.

It will take place April 15, the 100th anniversary of the day the White

Star liner—on its maiden voyage to New York from Southampton, England—slipped under the icy North Atlantic Ocean after hitting an iceberg off Newfoundland.

No reserve price has been set, but publicly listed Premier Exhibitions said the artifacts—some of which are now on show in Singapore and Curitiba, Brazil—were appraised at $189 million in 2007.

“We expect to identify a buyer capable of serving as a proper steward of the collection and the wreck site,” said RMS Titanic’s president Christopher Davino in the filing.

No reason was given for the sale, but last month Premier Exhibitions reshuffled its top management team after reporting a second-quarter loss of nearly $2 million due in part to fewer people going to its shows.

A new 3D version of director James Cameron’s 1997 blockbuster Titanic is to open in Canadian and U.S. theaters on April 6, four days before the centenary of the day the doomed ship began its ill-fated voyage. 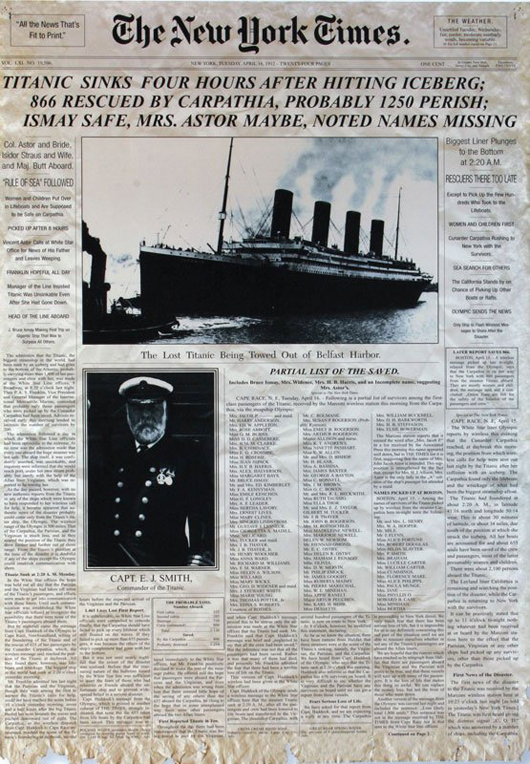 The April 16, 1912, issue of ‘New York Times’ pictured the Titanic and her captain on the front page. Image courtesy of LiveAucitoneers.com Archive and Guernsey’s.

Fate of Titanic, its treasures in U.S. judge’s hands