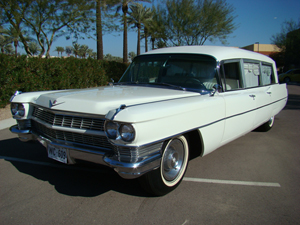 The 1964 Cadillac hearse that transported the body of President John F. Kennedy from the hospital in Dallas to Air Force One sold for $176,000 at the 41st annual Barrett-Jackson Scottsdale Auction last weekend. Image courtesy of Barrett-Jackson Auction Co.

DALLAS (AP) – The man who paid $176,000 for the white hearse used to transport President John F. Kennedy’s body following his assassination in Dallas plans to include it in his collection of about 400 cars in Colorado.

Stephen Tebo, a collector and real estate developer from Boulder, bought the hearse Saturday that was being offered by Barrett-Jackson Auction Co. of Scottsdale, Ariz. It sold for a bid of $160,000, plus a $16,000 buyer’s premium.

The 1964 Cadillac hearse carried Kennedy’s body as well as first lady Jacqueline Kennedy from Parkland Memorial Hospital to Air Force One at Dallas’ Love Field for the flight back to Washington on Nov. 22, 1963, according to the auction company.

“It was a solemn duty that it had taking him from the hospital where he was pronounced dead to Air Force One,” said Craig Jackson, CEO and chairman of the auction company. “I think everybody in the world remembers watching the hearse leave the hospital, heading toward Air Force One. It just sort of sunk into everybody that he’s gone.”

The hearse had been on display at a funeral home directors’ convention in Dallas in October 1963, the auction company said. After the convention, O’Neal Funeral Home of Dallas bought the hearse. It was that funeral home that was called upon to transport the president’s body.

In the late 1960s, the hearse was bought by Arrdeen Vaughan, a Texas man who owns funeral homes and a funeral vehicle business. He kept it in a private collection for more than four decades before selling it to the person who eventually put it up for auction.

Tebo said he plans to turn his car collection into a museum, hopefully in five to 10 years. The collection in Longmont, just outside of Boulder, is not currently open to the public, but Tebo does open it up four times a year to different nonprofit groups to help them raise money.

Other cars in his collection include a 1965 Rolls Royce custom made for John Lennon, a taxi used in the TV show Seinfeld and a jeep Frank Sinatra used on his ranch.

Tebo said he had expected the hearse would sell for anywhere from $500,000 to $1 million, so he wasn’t planning on bidding. But he jumped it when he saw the bids weren’t likely to go that high. As a collector, he said he tries to buy significant vehicles when possible.

Tebo said he wanted the hearse because of its historical significance.

“We remember specifically seeing the hearse leaving the hospital and driving very, very slowing to Air Force One and loading the casket on Air Force One. It was just an incredibly dramatic time in our lives,” Tebo said. 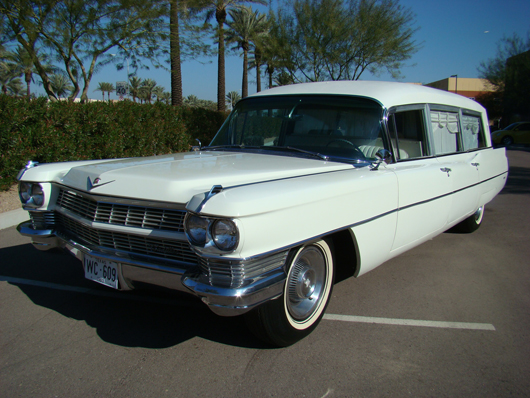 The 1964 Cadillac hearse that transported the body of President John F. Kennedy from the hospital in Dallas to Air Force One sold for $176,000 at the 41st annual Barrett-Jackson Scottsdale Auction last weekend. Image courtesy of Barrett-Jackson Auction Co.