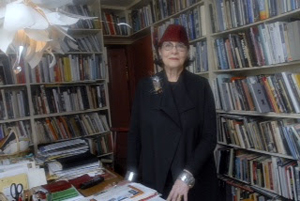 LAMBERTVILLE, N.J. – Helen Drutt, an authority in contemporary craft, will present a lecture at Rago Arts and Auction Center on Tuesday, June 10, during the preview for Rago’s 20th Century Design Auctions.

Drutt’s lecture, A Passionate Observer, hopes to bring insight into the changes in college curricula wrought by the G.I. Bill and its effect on the art and craft of post-World War II America.

Her involvement in the field began in the mid-1950s as a collector. She was appointed a cultural ambassador for the city of Philadelphia by the Office of Arts and Culture in 1965, and, in 1967, became a founding member and executive director of the Philadelphia Council of Professional Craftsmen.

She established her gallery, Helen Drutt: Philadelphia in 1973, devoting it to the furtherance of the contemporary crafts and makers she esteemed.

The auction house opens to the public at noon. A reception begins at 5 p.m. Drutt will speak at 6 p.m.