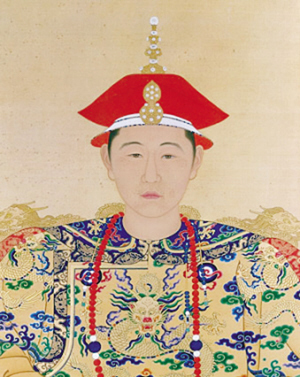 Young emperor Kangxi of China at about age 20, before 1722. Painted by an unknown court painter. Image courtesy of Wikimedia Coimmons.

BORDEAUX, France (AFP) — A section of a silk handscroll depicting a historically important trip by China’s longest-serving emperor is to go up for auction in France on Saturday.

Two other Chinese pieces from private French collections will also go under the hammer on that day as part of a sale hosted by auctioneers Alain Briscadieu.

The section of scroll on offer is part of the sixth in a celebrated series of 12 painted by the artist Wang Hui (1632-1717) to record a tour of inspection of southern China by the Emperor Kangxi.

Kangxi ruled from 1661-1722 and his trips to the south are seen as having helped consolidate Beijing’s rule over all of what constitutes modern China.

Chinese art expert Philippe Delalande said such handscrolls were often split up in the 1930s or ’40s after being imported by European merchants. At that time they were not nearly as sought-after as they are today, when a complete scroll would be likely to fetch up to 15 million euros.

Delalande said he was aware of two other sections of the scroll, one owned by a Chinese collector and one by another enthusiast in Phoenix, Ariz. “The whereabouts of the other pieces is a mystery,” he told AFP. “Everyone needs to have a good look through their attics.”

The other two prized items on sale are a Doucai porcelain plate from the Qianlong period (1736-1795) of the Qing dynasty which has the emperor’s stamp. “It is an exceptionally fine and large (50.7-cm-diameter) example of the period,” added Delalande. It is expected to sell for between 50,000 and 70,000 euros.

The third piece is a gilt bronze of a Bodhisattva Avalokiteshvara. It has been estimated at between 20,000 and 30,000 euros but could, according to Delalande, go for more than three times as much if there is significant interest from Chinese collectors.