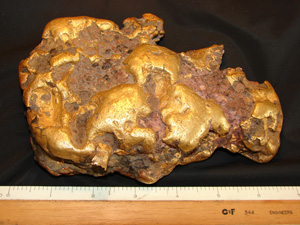 The 100-ounce Washington Nugget was found in a creekbed in the Sierra Nevada in February. Image courtesy of Holabird-Kagin Americana.

RENO, Nev. (AP) – Some 150 years after the forty-niners rushed west in search of riches, a new gold discovery in the Sierra Nevada is stirring excitement.

Fred Holabird, a mining geologist whose Reno-based company, Holabird-Kagin Americana, is one of the country’s largest sellers of Western Americana and is handling its sale, thinks it’s the largest California gold nugget left in existence.

Virtually all of California’s gold fields have been thoroughly combed by miners, he said, and other monster nuggets from the Golden State have been melted into ingots for money.

While bigger nuggets have surfaced in Australia in recent decades, no similar-sized placer nuggets from California have turned up in museums, he added. [Ed. – Placer nuggets are shallow mineral deposits that form directly from weathering and chemical disintegration of a gold-bearing quality vein near the surface.]

“The chances of finding something like this anymore are beyond remote. It could be one in a trillion,” Holabird said.

The man was using a metal detector in an unmined ancient stream bed near the old Mother Lode mining camp of Washington when he stumbled on the nugget in February 2010.

The Union of Grass Valley, Calif., has identified him as San Francisco businessman Jim Sanders.

The so-called Washington Nugget is thick and oblong, and resembles a “squished loaf of bread,” Holabird said, adding it was found in the same area where hydraulic mining was invented in the 19th century.

A lack of records makes it difficult to determine how the nugget compares in size historically, said John Clinkenbeard, senior geologist with the California Geological Survey in Sacramento.

But he said he’s unaware of any similar 100-ounce placer nugget being found in California in recent decades.

“I can’t put a numerical value on how rare it is to find a nugget like this,” Clinkenbeard said. “All I know is that large nuggets are very rare and your odds of finding one aren’t very good.”

The largest known nugget found in California weighed 54 pounds and was found in 1859 in Butte County, he added.

The California State Mining and Mineral Museum in Mariposa, Calif., displays the Fricot “Nugget,” a rare 13.8-pound specimen of crystallized gold discovered in the American River in 1864.

But Clinkenbeard and Holabird said there’s a difference between Mariposa’s crystalline gold specimen and the placer nugget found last year.

True nuggets such as the latter are a product of erosion in a modern or ancient streambed, while the former consists of native gold in quartz that has not gone through the same erosional process.

While current gold prices would make the Washington Nugget worth roughly $130,000, Holabird expects a collector to pay well more because of its historical value. Gold closed at $1,368.90 an ounce Friday.

“It’s worth more as a collectible,” he said. “No one will be melting this thing. It’s one of the most important California gold artifacts that exist.” 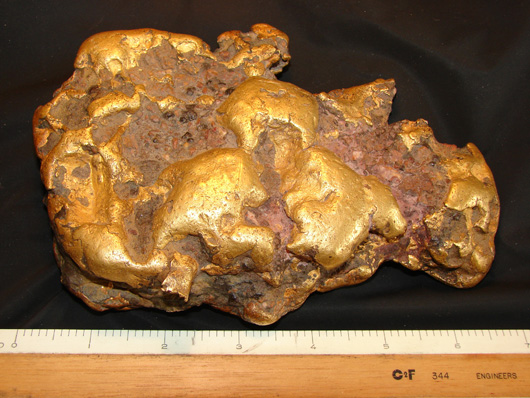 The 100-ounce Washington Nugget was found in a creekbed in the Sierra Nevada in February. Image courtesy of Holabird-Kagin Americana.