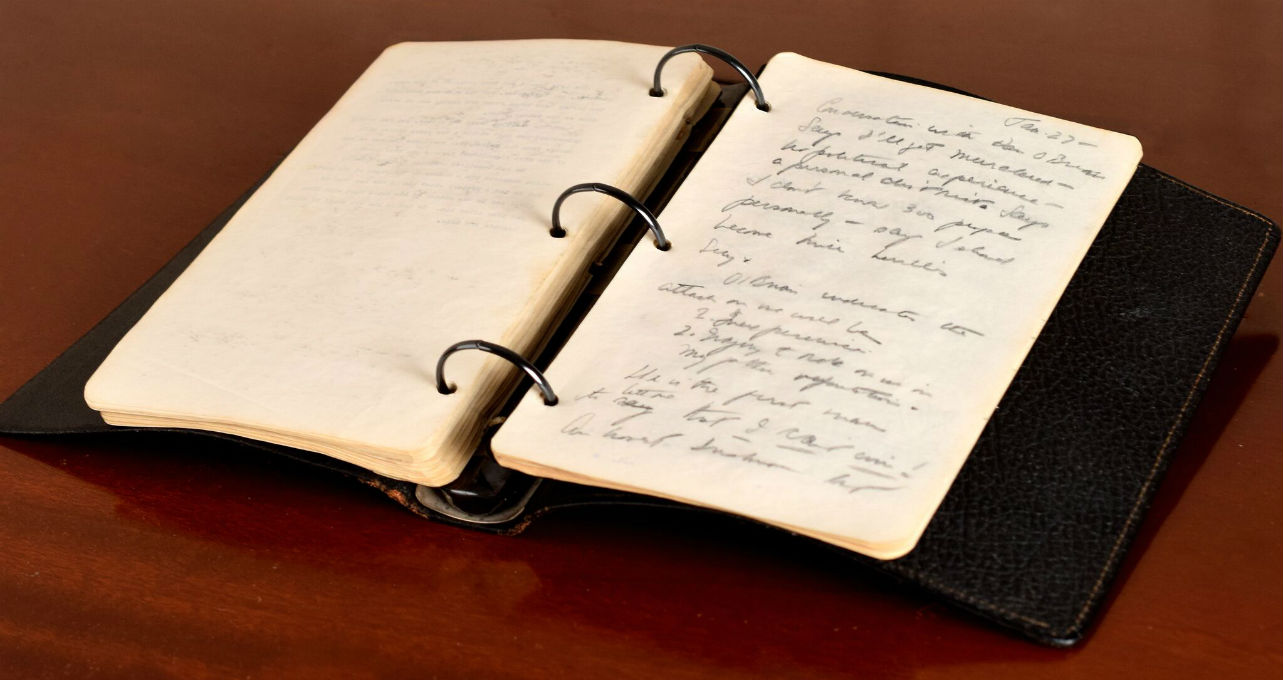 This diary was written in 1945 when the 28-year-old John F. Kennedy was a correspondent for Hearst newspapers. RR Auctions image

BOSTON (AP) – A diary kept by a young John F. Kennedy during his brief stint as a journalist after World War II in which he reflected on Hitler, the ambitions of the Soviet Union and the weakness of the United Nations is up for auction.

The diary was written in 1945 when the 28-year-old Kennedy was a correspondent for Hearst newspapers, rubbing shoulders with world leaders and traveling through a devastated Europe.

Boston-based RR Auction says the diary is expected to fetch about $200,000 at auction April 26.

The 61-page diary, mostly typed but including 12 handwritten pages, was given by Kennedy to Deirdre Henderson, a research assistant in his campaign office in the late 1950s.

“What’s remarkable is what he foresaw about the future of a world he would lead 16 years later,” said Henderson, who lives in the Boston area.

“This exceptional diary sheds light on a side of John F. Kennedy seldom explored and confirms America’s enduring sense that he was one of the most qualified, intelligent and insightful commanders in chief in American history,” said Bobby Livingston, RR’s executive vice president.

In the diary, Kennedy reflects on his time in a gutted Berlin.

“On some of the streets the stench – sweet and sickish from dead bodies – is overwhelming,” he wrote.

He even saw Hitler’s bunker, speculating that he was not killed.

“There is no complete evidence, however, that the body that was found was Hitler’s body,” he wrote. “The Russians doubt that he is dead.”

He wrote that Hitler “had in him the stuff of which legends are made.” But Henderson said that should not be misinterpreted as sympathy for the German dictator.

“He said that in reference to the mystery surrounding him and not the evil he represented,” Henderson said.

Kennedy witnessed the territorial ambitions of the Soviet Union in negotiations to rebuild a postwar Germany and the role the U.S. should play.

“Yet, if we pull out, we may leave a political vacuum that the Russians will be only too glad to fill,” he wrote.

Kennedy also expressed doubt about the effectiveness of the fledgling United Nations.

“In practice, I doubt that it will prove effective in the sense of its elaborate mechanics being frequently employed or vitally decisive in deterring war or peace,” he wrote.

The information in his diary has been published before. Henderson said she is selling it in conjunction with the 100th anniversary of Kennedy’s birth this year and so it can be properly preserved.

“This diary is a great testament to what he could have been as president had he not been killed so young,” she said.