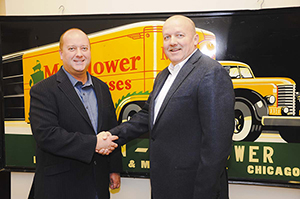 (Left) Dan Morphy, owner and CEO of Morphy Auctions in Denver, Pa.; and Dan Matthews, founder of Matthews Auction Co. of Nokomis, Illinois, which will operate under the Morphy’s banner as of January 1, 2014.

DENVER, Pa. – Dan Morphy, CEO of Morphy Auctions, has confirmed that Matthews Auction Co. of Nokomis, Ill., will become a division of Morphy’s as of January 1, 2014. Dan Matthews, owner of the Midwestern auction house known for its high-profile sales of antique and vintage petroliana and automobilia, will head the new department.

“This is a great match-up,” said Morphy. “We’ve always wanted to expand and develop our automotive-related category into a stand-alone division with its own specialized sales, and at the same time, Dan Matthews has built an exceptional auction company that is respected by petroliana and automobilia collectors everywhere. We already share many clients in common with Matthews, so it will be a seamless transition.”

Morphy’s will perpetuate the successful formula Matthews Auction Co. has already established, holding four or five major sales per year in conjunction with popular petroliana shows. These events include the twice-yearly Chicagoland Petroleum & Advertising Show in Peotone, Ill., the Iowa Gas Swap Meet, and the Check the Oil (CTO) Show in Dublin, Ohio. The first auction reflecting the new business union between Morphy’s and Matthews Auction Co. is slated for Feb. 28, prior to the Peotone show.

Dan Matthews, who authored the reference “The Fine Art of Collecting Petroliana,” is considered by many to be the top authority in his field. While his own auction company might well have continued to thrive as the market leader within its niche in the years to come, Matthews said he recently came to the conclusion that he needed to “take it to the next level.”

While picking up a quarter-million-dollar collection of automotive advertising signs in New England, Matthews said he noticed that the consignor also had several important decorative art collections that were being “parceled out” to other auction houses.

“I thought, ‘If I had been associated with Morphy’s, the consignor would have given all of the collections to me, because it’s always easier to go to a one-shot place,’” Matthews recalled.

That was one important factor in his decision to merge with Morphy’s, which is a full-service auction house, but it wasn’t the main reason, Matthews said.

“I like meeting with people and making sure that things get done right, like cataloging and advertising – but I don’t like the actual office part of it or being a manager,” Matthews confessed. “I’ve always said you make your own destiny, so when Dan Morphy offered me an attractive package that would free me to do what I enjoy most, I decided to go for it.”

Matthews, who holds an auctioneer’s license in Illinois, Indiana, Wisconsin, Ohio, Kentucky and New Hampshire, plans to obtain a Pennsylvania license, as well, but he and his current staff will continue to be based in Nokomis, Illinois.

In summary, Dan Morphy stated: “There are very few people in the antiques and auction business who are as respected as Dan Matthews. His tremendous knowledge and personal integrity put him right up there with the best of the best. I feel extremely honored that Dan has agreed to join our operation, and I can’t wait for Morphy’s to produce its first petroliana auction under his supervision. There are exciting times ahead.”

Both Morphy’s and Matthews Auction use LiveAuctioneers for their Internet live-bidding services. 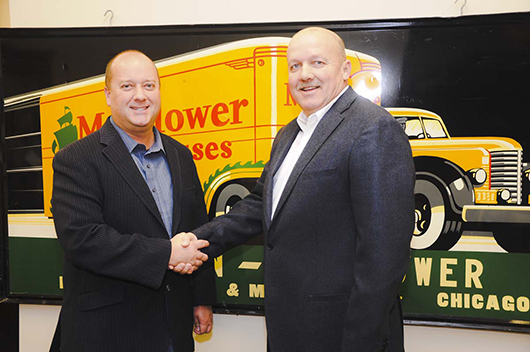 (Left) Dan Morphy, owner and CEO of Morphy Auctions in Denver, Pa.; and Dan Matthews, founder of Matthews Auction Co. of Nokomis, Illinois, which will operate under the Morphy’s banner as of January 1, 2014.