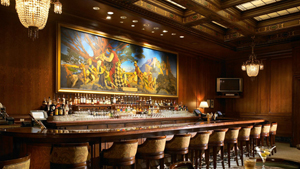 The Maxfield Parrish painting ‘The Pied Piper.’ Image courtesy of the Palace Hotel.

SAN FRANCISCO (AP) – Officials at San Francisco’s Palace Hotel have removed a painting considered to be a legendary work of art from the wall of the hotel’s main bar and plan on selling it at auction.

Hotel officials estimate the Maxfield Parrish Pied Piper to be worth be between $3 million and $5 million, the San Francisco Chronicle reported Saturday.

After hanging in the Pied Piper room for more than a century, hotel officials told the Chronicle that the painting was being sold because “it is no longer practical for the hotel to display, an original work of this value and cultural significance, in a public area.”

The painting, which measures 16 feet long by 6 feet deep, is considered a major San Francisco cultural treasure and is a major feature of the Pied Piper room, selected as one of the city’s “legacy bars and restaurants” by the San Francisco Architectural Heritage.

After being removed from the wall of the bar Friday, the painting will be sold as the centerpiece of the Christie auction house’s spring sale of important American paintings on May 23.

The mural was painted by Parrish, one of the most noted American painters of the 20th century, in 1909 especially for the Palace Hotel, which reopened that year. The original Palace Hotel was destroyed in the 1906 San Francisco earthquake and fire. 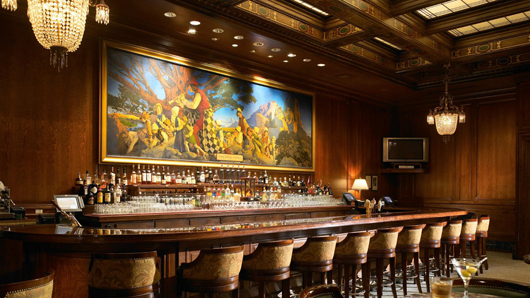 The Maxfield Parrish painting ‘The Pied Piper.’ Image courtesy of the Palace Hotel.