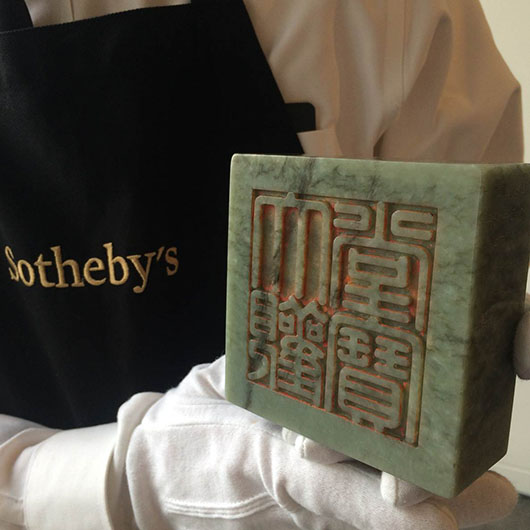 NEW YORK – During Sotheby’s opening day of Asian Art sales on Wednesday, the Da Guan Tang Bao, an important imperial jade seal, Qing Dynasty, Qianlong Period, from the collection of Lolo Sarnoff sold for $4.45 million. It was estimated to sell for $1 million to 1.5 million.

The seal is believed to have been collected by Sarnoff’s father, Willy Dreyfus, and had been in the family’s collection for several decades. The $4.45 million result is the highest price so far in the 2015 New York-wide Asia Week series of auctions.

In addition to the Da Guan Tang Bao, a pale celadon jade seal with inscription “Huang Tang Shou Ming Zhi Bao,” probably Ming Dynasty, also from the Sarnoff Collection, shattered all presale expectations when frenzied bidding drove the price to $1.64 million against an estimate of $20,000-$30,000.

Both lots were offered in “Inscriptions: History as Art,” a sale that charted the artistic development of Chinese writing and calligraphy. The sale totaled $9.48 million, well over the $3.5-$5.2 million estimate.

The Sarnoff seals were just two among a number of outstanding results for pieces from distinguished private collections. A  fine and rare carved “Ding” “Peony” bowl, Northern Song Dynasty offered in the single-owner sale “Chinese Art through the Eye of Sakamoto Gorō – Ceramics” achieved $3.37 million (est. $1-$1.5 million). Property from the estate of Dr. Claus Virch, former curator of 19th century and European paintings at the Metropolitan Museum of Art in New York, brought a total of $1.18 million, double the estimate in the “Indian, Himalayan and Southeast Asian Art.” In the same sale a very fine gilt copper alloy figure of Chakrasamvara and Vajravarahi, Tibet, 15th century, fetched $1.57 million, three times the $400,000-$600,000 estimate.