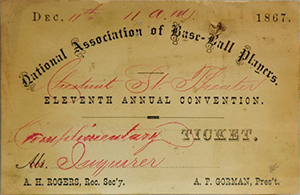 BIDDEFORD, Maine (AP) – A piece of sports history dating back to the 1867 meeting that institutionalized racial segregation in professional baseball is heading to the auction block.

Among the items up for sale by Saco River Auction Co. is a ticket to the Philadelphia baseball convention, which marked the drawing of a color line that wasn’t eradicated for good until 80 years later by Jackie Robinson.

During the convention, the National Association of Base-Ball Players’ nominating committee responded to a black team’s request for membership by banning teams with black players.

The convention ticket, along with an 1870 Philadelphia Athletics season ticket and a painting of Cy Young in a Boston uniform believed to date to the early 1900s, will be sold Wednesday during an auction at Saco River’s offices in Biddeford.

The convention ticket is the only one known to be in existence, said John Thorn, official historian for Major League Baseball.

“For me, the great collectibles are the implausible survivors. This should’ve been thrown away. How it survived in someone’s scrapbook is borderline miraculous,” he said.

The Philadelphia Pythians were coming off a successful season in 1867 when the black team petitioned to join the National Association of Base-Ball Players, the first organization governing American baseball, Thorn said.

During the December convention, its nominating committee voted unanimously to bar any club with “one or more colored persons,” setting the stage for racial segregation for years to come, he said.

A handful of black players remained part of organized baseball clubs in the U.S. and Canada until 1899, when Bill Galloway became the last for decades to come, Thorn said. The color line remained in place until Robinson entered the minor league in Montreal in 1946 and the major league with the Brooklyn Dodgers a year later, Thorn said.

The convention ticket is so rare no one knows what it’s worth. “Collectors may not be drawn to it, but historians are drooling over it,” Thorn said.

The convention ticket and the 1870 Philadelphia Athletics season ticket were mislabeled as railroad tickets when they were purchased for $60 as a boxed lot of miscellaneous items in Massachusetts, said Troy Thibodeau, manager and auctioneer at Saco River Auction.

The Cy Young painting, found rolled up in an attic in Bangor, depicts the famous pitcher in a uniform of the Boston Americans, predecessor of the Red Sox, and it’s believed to date to the early 1900s, Thibodeau said. Both the Red Sox and the National Baseball Hall of Fame and Museum have made inquiries about it, he said.

Baseball collectors have shown they’re willing to pay for a piece of history.

“If you’re a baseball fan, this old stuff is the roots of the modern game we see today. People just love it. They love history,” Thibodeau said. 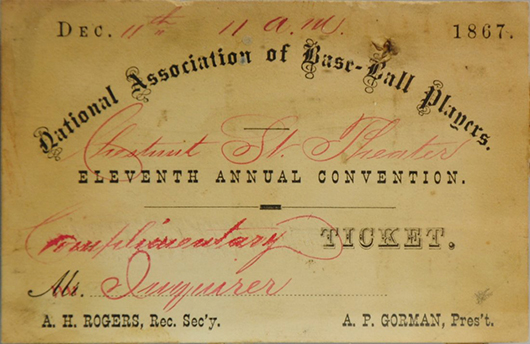