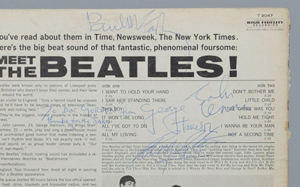 A close-up view of the back of the ‘Meet The Beatles!’ album shows the signatures of the Fab Four. Image courtesy of Case Antiques Inc.

KNOXVILLE, Tenn. – On Saturday, Oct. 1, Case Antiques Inc. Auctions & Appraisals will gavel one of the most anticipated pieces of Beatles memorabilia to ever hit the market: a Meet The Beatles! album signed by all four Beatles at the time of their American debut on American TV. It tells the behind-the-scenes story of which the public was unaware: the illness that almost kept one of the Fab Four from being part of that legendary performance.

The album comes from the estate of Dr. Jules Gordon, a former house physician at New York’s Plaza Hotel, and will be included in Case’s Fall auction, which will take place at the company’s gallery in Knoxville. LiveAuctioneers.com will facilitate Internet live bidding.

On Sunday, Feb. 9, 1964, The Beatles made their historic live debut on the Ed Sullivan Show, attracting more than 73 million viewers. But, the day before the show, there was concern that one of the band members, George Harrison, might miss the big moment because of strep throat.

Thomas Buckley noted in the New York Times on Feb. 8, 1964, “Mr. Harrison, who is known as the quiet Beatle, awoke yesterday with a sore throat. He was treated by Dr. Jules Gordon, used a vaporizer and rejoined his colleagues at the studio late in the afternoon. ‘I should be perfect for tomorrow,’ he said.”

But the situation was more serious than they let on. Photographs taken by Dezo Hoffman during the Saturday afternoon rehearsal show Neil Aspinall sitting in for Harrison. And in the book The Beatles Off The Record by Keith Badman, Harrison’s sister, Louise Caldwell, recalled: “The doctor said he couldn’t do the Ed Sullivan Show because he had a temperature of 104! But they pumped him with everything. He was thinking about getting a nurse to administer the medicine, every hour on the hour. Then the doctor suddenly realized that I was there and was his sister and he said to me, ‘Would you see to it? It’s probably just as well that you’re here because I don’t think there’s a single female in the city that isn’t crazy about The Beatles! You’re probably the only one who could function around him normally.’”

The physician who treated Harrison was Dr. Jules Gordon, the house doctor at the Plaza Hotel from 1942 until 1985. Dr. Gordon was called to the Presidential Suites on the 12th floor where The Beatles were staying. As a doctor who treated many celebrities, Dr. Gordon didn’t fawn over The Beatles. “He was very unassuming and treated everyone with the same respect, no matter who they were. People just took to him,” remembers a Gordon family member. Dr. Gordon met The Beatles on at least two occasions during their visit to New York for the Ed Sullivan Show and commented to his family that the band members were very accommodating and likeable each time.

The album signed for Dr. Gordon reads “To Doc Gordon thanks for the JABS from George Harrison,” followed by the signatures of Paul McCartney, John Lennon and Ringo Starr.

Frank Caiazoo, an expert with 24 years of experience studying and authenticating Beatles autographs, notes in the letter of authentication which accompanies the album that “The ‘jabs’ referred to were the numerous shots administered by the doctor in his efforts to assure that George would be able to take the stage that night. As it turned out, the performance was The Beatles’ most important … ever. The good doctor did his job well and all four members of the band went on as planned, stepping full force into music and television history.”

The Meet The Beatles! album included the group’s first U.S. chart-topping hit I Want to Hold Your Hand. It was released in the U.S. on Jan. 20, 1964 just ahead of the band’s first U.S. tour, and less than three weeks before The Beatles signed it for Dr. Gordon.

The Gordon family is aware of three or four other albums that The Beatles signed for Dr. Gordon, including one sold by Case Antiques in its May 2011 auction for $63,250 (including buyer’s premium). It is not clear what happened to the others; the family says there are no more remaining albums in their possession.

The Meet The Beatles! album in this auction is conservatively estimated at $40,000-$45,000. “However,” said company president John Case, “this is such a rare item that the hammer price will likely be much higher. Autographs by all four Beatles on an LP from their early years are highly sought after by collectors.” As Autograph Magazine noted in an article on Jan. 25, 2011, “If you have a Beatles album signed by all four band members, you’ve got something quite valuable. Albums in good condition typically range from about $15,000 for the most common one, Please Please Me, to well over $100,000 for some of the rarest albums, especially U.S. releases … Band-signed Beatles albums are very hard to come by.”

This remarkable piece of Beatles history coincides with the television debut of Martin Scorsese’s two-part documentary, George Harrison: Living in a Material World, which will air on HBO on Oct. 5 and 6.

The Meet The Beatles! album has been authenticated by the world’s leading expert, Frank Caiazzo, the only autograph authenticator in the world who specializes solely in Beatles signed and handwritten material. A signed authentication letter from Caiazzo is included with the album, verifying its provenance and authenticity.

To authenticate the album, Caiazzo compared the signatures on the album to his vast archive of authenticated Beatles autographs and determined that not only were the autographs indeed genuine, but also that they date precisely from the period of the Beatles’ first visit to America in early 1964.

The auction will be held at Case’s gallery in the historic Cherokee Mills Building, 2240 Sutherland Ave. in Knoxville. The sale will begin at 9:30 a.m. Eastern. A preview will take place on Friday, Sept. 30, from noon to 6 p.m. Eastern. 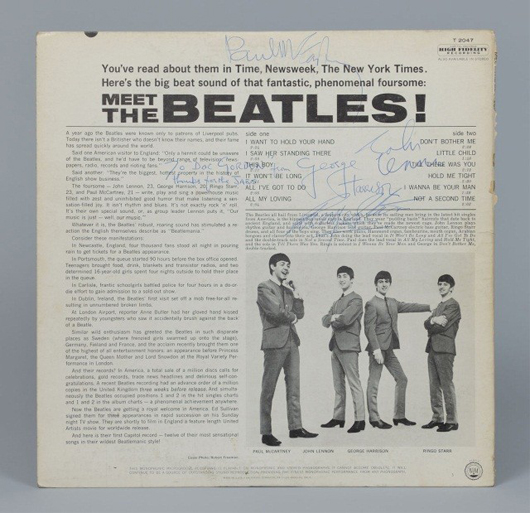 The term ‘Beatlemania’ was already coined on the liner notes of the ‘Meet The Beatles!’ album. Image courtesy of Case Antiques Inc.