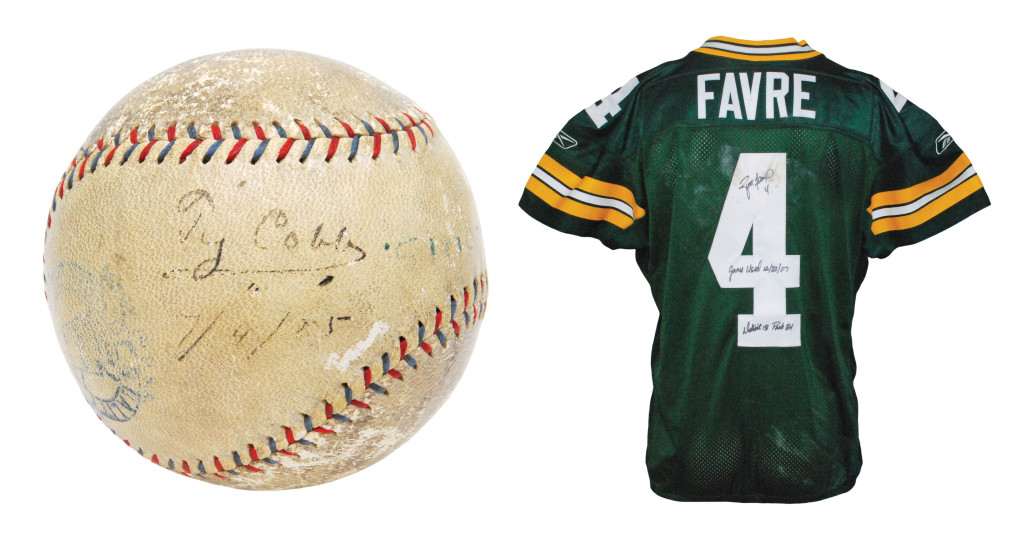 Action from the batter’s box is led by Lot 183, a Ty Cobb game-used and single-signed record-setting home run baseball from May 6, 1925. The ball is the very one that Ty Cobb hit to launch his fifth home run over a two-day period in a game pitting his Detroit Tigers against the St. Louis Browns. The back story is well documented. After being constantly criticized by reporters for not hitting the long ball like Ruth, Gehrig and others, Cobb decided to show he could do just that. While talking to a reporter before the game on May 5, he stated: “I’ll show you something today. I’m going for home runs for the first time in my career.” Cobb lived up to his words as he hit an astonishing five home runs in two consecutive days, a performance that has been equaled by a few, but never surpassed. The record-setting, fifth-home-run baseball comes fully documented and with a letter from the family of the fan who caught it and later had it signed by Cobb. The ball has a $5,000 reserve.

“This ball is a perfect example of how every piece of professional sports memorabilia comes with a story for the ages,” said Richard Russek, president of Grey Flannel Auctions. “Collectors don’t view what they acquire as being just tangible objects; they know that what they have puts them as close as they could ever get to the superstars and momentous events that shaped sports legend. There’s literally one degree of separation between the item and the athlete.”

Hall of Famer Lou “The Toe” Groza left no question as to how he earned his nickname. Groza was a nine-time Pro Bowler, five-time NFL field goal leader, four-time first-team All-Pro and the NFL scoring leader in 1957. He was elected into the Pro Football Hall of Fame in 1974. On Dec. 10, 1961, Groza broke the NFL record for total points scored with 826, as he kicked a field goal and two extra points. Grey Flannel is offering as Lot 365 the Cleveland Browns road jersey (below) Groza wore during that very game. Several photo matches and a letter from the family accompany the finest Groza jersey ever offered. Reserve: $2,500. 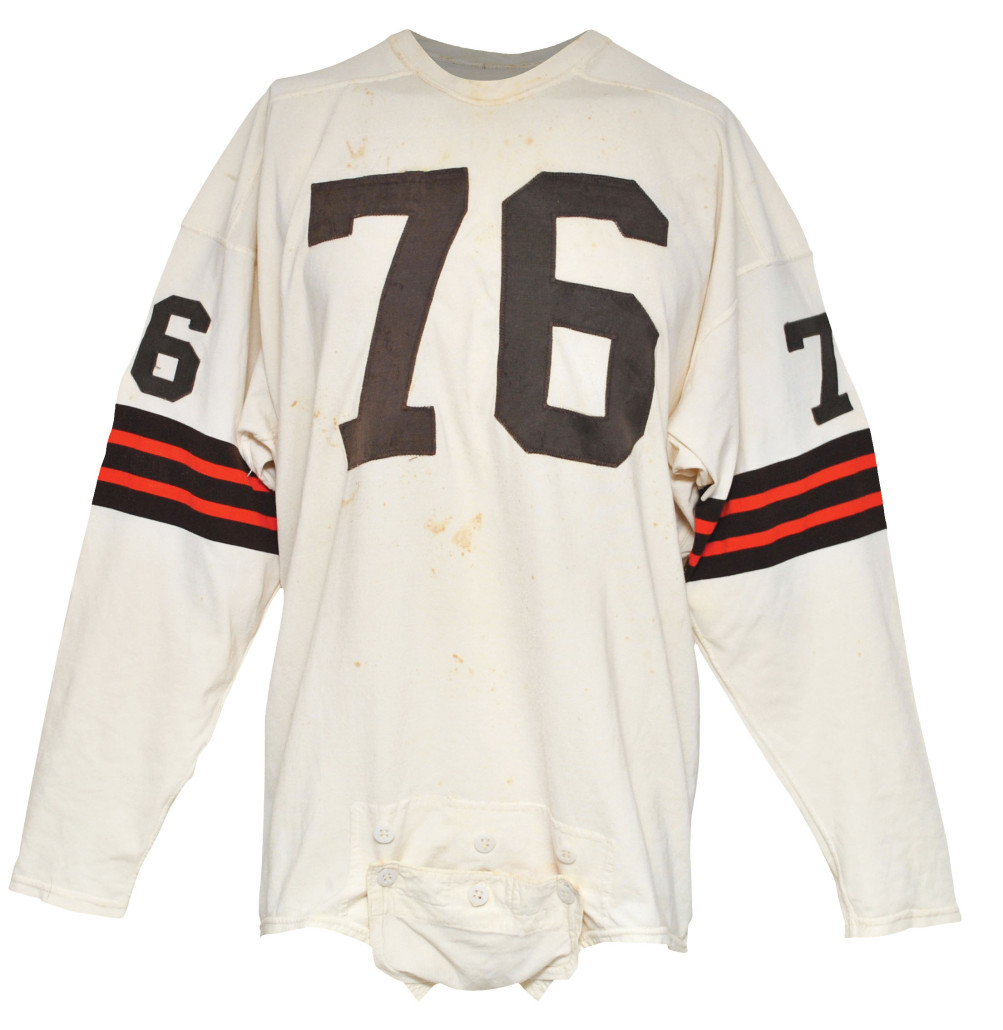 The historical factor goes off the charts with Lot 467, Brett Favre’s game-used Green Bay Packers jersey from his final regular season game as a Packer at Lambeau Field. In front of a home Lambeau crowd of over 70,000, Favre completed nine of 11 passes for 99 yards and two touchdowns, nos. 441 and 442 of his career. A letter of authenticity from Favre himself accompanies the jersey as well as several photo matches. Reserve: $10,000.

Lot 550 is a Wayne Gretzky game-used Los Angeles Kings road jersey “The Great One” wore during the 1992-93 NHL Season. The jersey (below) comes with a letter of authenticity from the Los Angeles Kings, as well as a second letter from the team’s trainer, Pete Demers. Reserve: $5,000. 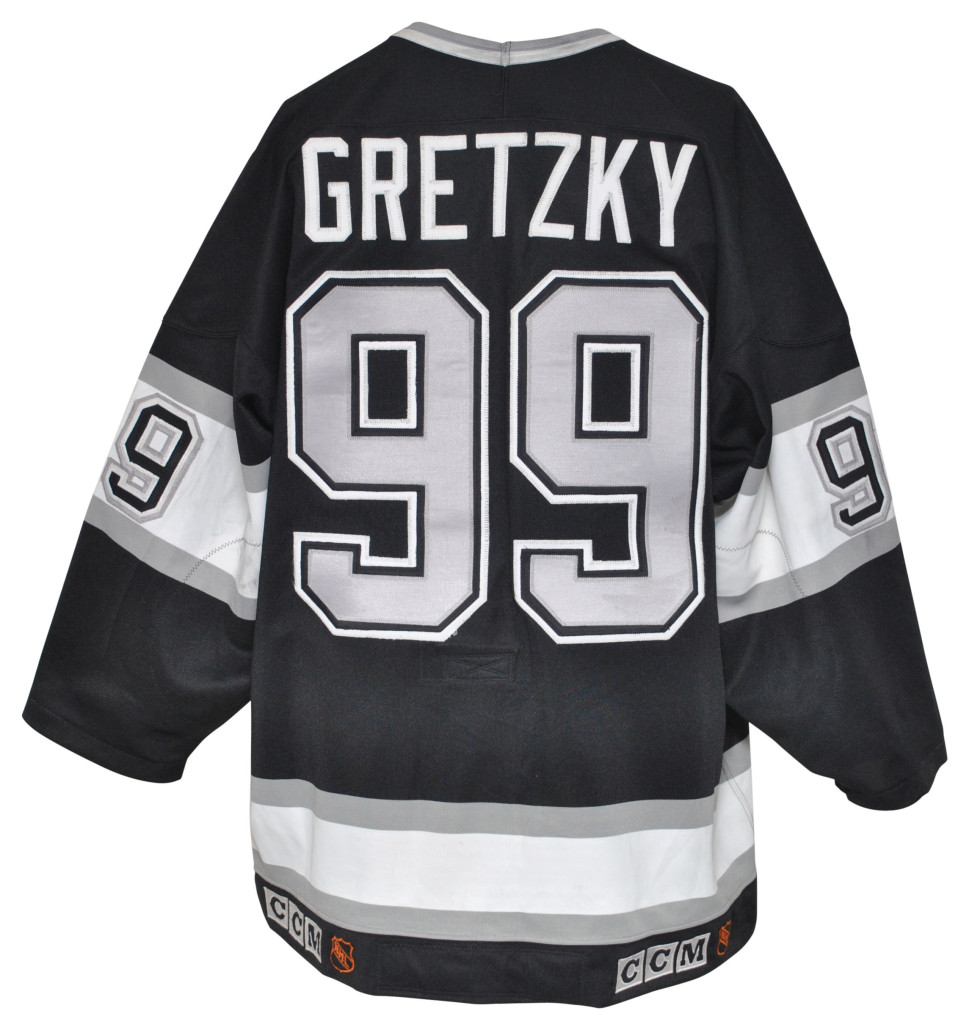 With Lot 551, the clock turns back to 1951 and the first edition of the NBA All-Star Game, after which “Easy” Ed Macauley was awarded the MVP Trophy. The game featured 15 future hall of famers, including Macauley, who finished with 20 points and six rebounds en route to MVP honors as the East defeated the West, 111-94. Macauley played in seven consecutive all-star fames, was crowned an NBA champion with the St. Louis Hawks in 1958 and was inducted into the Naismith Memorial Basketball Hall of Fame in 1960. The trophy (below) comes with a letter of authenticity from the Macauley family. Reserve: $5,000. 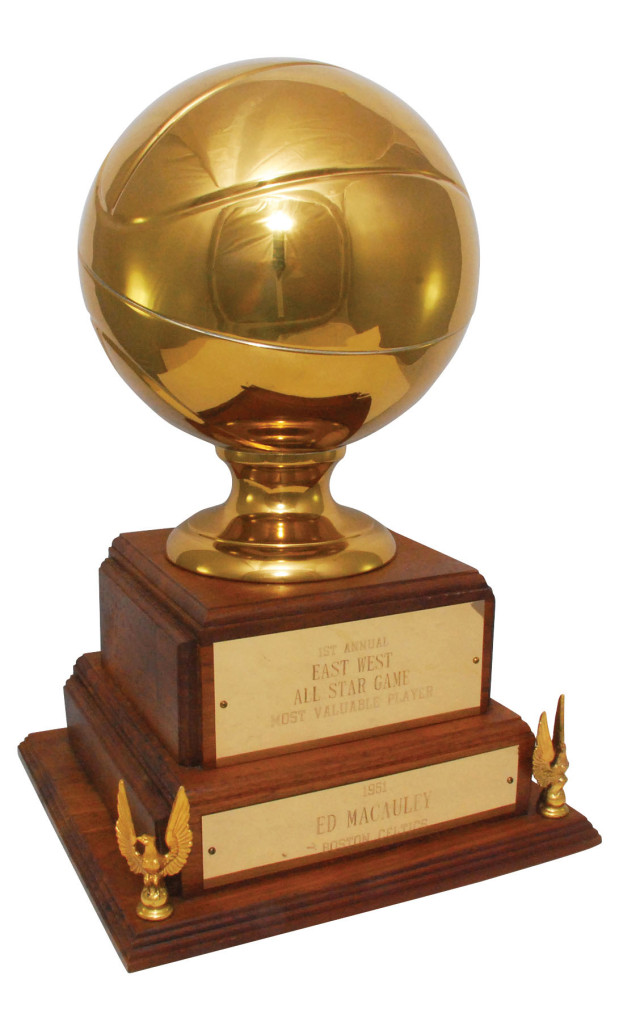 Other Dec. 9 auction highlights include:

The fully illustrated catalog of the Dec. 9 is available online at www.GreyFlannelAuctions.com. For additional information on any item, call 631-288-7800 ext. 223 or email info@greyflannelauctions.com.